Anne Murphy and her sister JoAnna, pitch in like many other members of the St. Paul’s family to maintain the 40th Annual Flower Fair is a success. (Photo by Micheal R. Driscoll)

For some the rites of spring begin with the iconic call to “Play Ball!” on a field of dreams.
For others the season is unofficially announced by returning robins singing in the yard.
In Cambridge, Md., warmer weather’s arrival has been distinctly heralded by the start of St. Paul’s United Methodist Church’s annual Flower Fair, held the first week of May for the past 40 years.
School teacher Roseanna Twilley and several ladies assisting in the church kitchen initially proposed holding a flower fair to help pay for the congregation’s Fellowship Hall building.
The idea took root and flourished, becoming much more than a church event and blossoming into a community fixture.
For a time, the fair featured a princess being crowned and ceremonially marching down the center aisle; initially the festivities took place in the open air.
In recent years, tents became a familiar and welcome feature.
Whether cool, hot or rainy, people always come out, said long time St. Paul’s congregant and Cambridge City Council President Robby Hanson, who stepped up to help chair the enterprise a few years back after the passing of longtime leader Howard Chow.
This year, as soon as calendars pronounced May’s arrival, church youngsters under congregant Larry Ziegler’s direction set up the tables and tents outside St. Paul’s Maryland Avenue location, tweaking anticipation for the sights and smells of what has become a time honored tradition. (The youth members are also responsible for taking everything down afterwards, Hanson noted.)
This year, as in years past, rainbows of colorful blooms cascaded down from hanging baskets and bedecked buffet tables laden with potted floral plants, drawing the passerby’s eye with delightful shades of scintillating scarlet, cool refreshing coral, powder soft pink, and flaming fuchsia.
The unmistakable aroma of oyster fritters and crab cakes wafted over from the refreshment tent, which also served up heavenly homemade ice cream and a praiseworthy selection of baked goods, plus hot dogs, French fries and sodas.
Hanson has long served as chief fritter fryer, an honor bestowed upon him through marriage via his wife’s uncle, he chuckled.
The St. Paul’s Methodist Men are renowned throughout the town for their tasty oyster treats, but give credit to the Methodist Women for the recipe, Hanson.
Despite the slim chance of anyone going away hungry, a fried chicken dinner closed out the first day, followed with a concert featuring St. Paul’s renowned musical Praise Team, who regularly lend their voices to uplifting contemporary worship selections during the first of two Sunday morning services conducted by Pastor Bonnie L. Shively.
St. Paul’s popular basement boutique “yard sale” was open throughout the fair, and for the second year new merchandise baskets were offered up for bid via ongoing silent auction. Hanson expressed special appreciation to Simmons Centre Market, one of downtown Cambridge’s most enduring businesses, for support in providing flowers and food supplies.
He also credited committee leaders, who donated their time and organizational skills planning crucial details starting just after the first of the year, then coordinated numbers of volunteers from the congregation as well as unaffiliated participants who help run the fair smoothly and successfully, all to support St. Pauls’ expansive youth program and mission activities.
Beverly and Alan Gorsuch organized the flowers; Shirley Marshal the food booth; Darlene Holiday the dinner; Tammy Hodge and Rose Parks the baked goods and Fred and Nancy Hebdon the silent auction.
Hanson also wanted to give a special “shout out” to the group of ladies collectively responsible for running the Basement Boutique & Yard Sale, as well as Renee Redmer, the Redmer and Newcomb families, plus the numerous culinary contributors, who began, weeks before the fair, crafting the popular homemade ice cream with fresh fruit and other natural ingredients. 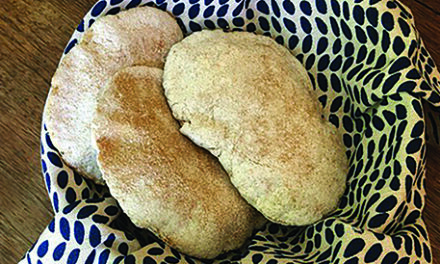 Embrace moondust for your plantings

The Joy of Sedum