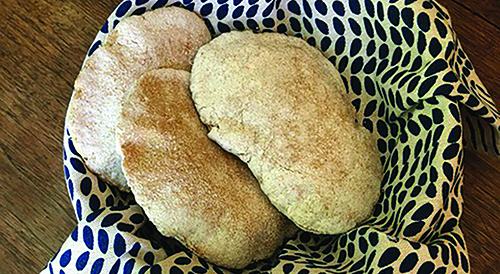 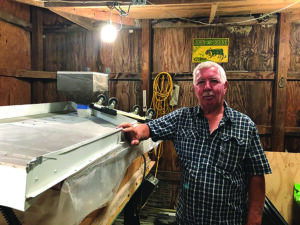 The Old Wye Mill, Maryland’s oldest operating grist mill, is steeped in history. Built in 1682, its iconic water wheel and stones ground grain supplying George Washington’s troops.
Thanks to Caroline County farmer Gerry Godfrey, the mill now offers an even deeper dive into the past, via the ancient grain known as Einkorn.
While the process of using water and stone to grind wheat into flour dates as far back as 71 B.C., einkorn has been identified as one of the first wheat varieties cultivated up to 10,000 years ago in the Middle Eastern/Fertile Crescent region.
Recently rediscovered by many exploring ancient grains as alternatives to modern wheat, einkorn’s renaissance reached the Mid-Shore in 2019 via a test plot sown on Godfrey’s 90-acre Mount Zion Orchard, farmed by his father before him.
While Godfrey had previously cultivated squash, tomatoes, peppers, beans and even holly trees, he decided to try his hand at the unique biblical-era wheat variety when the health of family members greatly improved after eliminating conventional wheat from their diets.
Daughters-in-law Christina and Baily discovered that using gluten-free rice, coconut and almond flours successfully created sweet baked goods they could safely consume.
But bread requires some gluten protein in order to rise and resemble what we’ve come to think of as the staff of life.
Godfrey, who graduated from the University of Maryland with an Agricultural Science degree, joined them in researching ancient grains commonly known as spelt, farro, kamut and ultimately einkorn.
When a family friend shared with them a tasty loaf of crusty, aromatic sourdough bread made from einkorn, Godfrey said that sealed the deal and he began laying the groundwork to grow it himself.
Earmarking a half-acre test plot, he planted several seed varieties and with a used All-Crop combine harvesting in late summer.
Pleased with the results of their own home-ground home-baked einkorn wheat loaf, Godfrey’s cultivation plan continued.
After the crucial Hessian fly date, regarded as the safe go ahead once the egg bearing pesky insects are no longer present in wheat fields, he sowed three more one-acre plots using several strains from Oregon and Idaho seed suppliers.
In 2020, Godfrey selected the best performer from among the samples grown and planted ten acres with the goal of offering a product which, though, much lower yielding in quantity, would prove as pleasing to people’s taste buds as their physical well-being, along with a mouth-watering aroma.
A 2017 study published by the National Institute of Health confirmed that einkorn contains more of the anti-inflammatory antioxidants known as carotenoids than conventional modern wheat.
Though also smaller in size than modern wheat (einkorn is german meaning “one seed”), each berry contains a greater amount of germ and bran, oil and protein, protected by a tougher hull.
And while removing the hull of most commercially grown wheat depletes its nutritional value, einkorn suffers no such effect.
However, the strong outer shell does present a challenge to growers.
Godfrey successfully devised his own device, creatively adapting accepted ideas with an improvised combination of an old combine’s cut up rasp bars for hulling, fixing a fan to a gravity table for further winnowing of grain from lighter hulls.
Two old concepts used in an innovative way, Godfrey says.
Godfrey delivers 50-pound bags of dehulled einkorn grain to Old Wye Mill regularly, and its millers convert it to fine flour.
Based on their own research and experience, the Godfreys highly recommend einkorn for baking and eating, but offer insight into several challenging aspects.
For one thing, the gluten is “simply different” than that contained in modern wheat, he says, also making up a smaller percentage of the flour.
The gluten amount and type results in a reduction of the need to knead the dough. And the flour absorbs water more slowly than regular flour necessitating much more resting time.
Also, to help prepare a finer, more forgiving flour, he suggests sifting it first with a #30 mesh sieve (#50 for pastry).
To get used to handling einkorn, they suggest starting with recipes for cookies, biscuits, pancakes, as well as cobbler.
Bread, of course, is more dependent on gluten to produce a satisfying loaf.
You can substitute a half-cup of einkorn for conventional flour, decreasing your liquid, to add a sweet, nutty flavor to your favorite bread recipe.
If you’re making an all-einkorn loaf, allow the dough to rest longer than you otherwise would to ensure that the moisture permeates the flour. Then let it rise on a sheet of parchment paper, and use the paper as a handle to support the dough as you lift it into a hot clay or iron pot for baking.
Most of all, einkorn is best, they add, when home machine milled, but can be stored in the freezer for future use.
Since reopening to the public this year, Old Wye Mill has been able to offer einkorn grain delivered directly from the Godfrey farm, freshly ground on their premises.
While the mill’s regular hours for the season ended in October, all of the mill’s flours, including einkorn, remain available at the Friends of Wye Mill office located at 28637 Queen Anne Highway in Wye Mills.
The Mill will be open three additional days for its annual Christmas Shop – Niv. 13, Dec. 4 and Dec. 18.
For more information, visit oldwyemill.org and mountzionorchard.com.

It’s time to prepare your home, hearth for winter