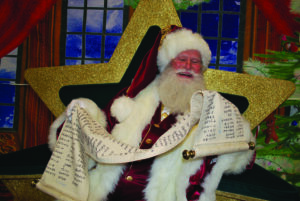 Santa Jerry looks over the list of naughty and nice kids he may see at special events and family visits. (Photo courtesy Jerry Wise)

Have you ever left a voicemail for Santa? Though Santa Jerry’s number is from Delaware rather than the North Pole, as soon as his jolly voice tells you he’s in his workshop and to please leave a message, you get the feeling it’s “him.”
If you’ve been around a young child during the holidays, you know the Santa visit is special both for the children and those that love them and sets the magic of holiday season.
Jerry Wise is undoubtedly one of the “good” Santas, with his custom-tailored suit and overall jollyness. Another level of realness is his beard.
He is considered a “real beard Santa,” and is a member of the International Brotherhood of Real Bearded Santas.
Santa Jerry is married to an equally endearing Mrs. Claus who fits the role and robe just right to be warm and welcoming to their little guests. After both he and Mrs. Claus completed official Santa training in Denver they became an ultimate Santa Claus Power couple.
It’s hard to believe Wise was not Santa since birth, but only for the last handful of years. Before suiting up in the infamous red suit, he was a regional sales manager. The customer service and people skills certainly carry through to his new gig as well, softening even those with hearts three sizes too small.
During his off season, he and his wife are full-time RV travelers, hop-scotching all over the United States. Though they could be in the warm weather down south or cruising in the Midwest, he carries his Santa identity with him full time. He says he can’t step foot in a grocery store without someone recognizing Santa! He will greet the child, pose for pictures and always has special “I met Santa” coins to hand out.
As the holidays shifted last year, many families skipped the trip into the mall to see Santa and many larger community events were cancelled. This led to more homes and families welcoming Santa Jerry and Mrs. Claus in for personal and unforgettable visits. He said the home visits offer more time for children to warm up to Santa (and in some cases, list off a longer Christmas list!)
And yes, even Santa does Zoom and video meetings. A video chat with just between a family and Santa became another special way to celebrate and can be a convenient option to squeeze in a visit with a busy holiday season.
For children that need a more specialized accommodation, Santa Jerry is fluent in American Sign Language and also can slow the pace and accommodate children with special needs.
Though you may find yourself a bit starstruck and giddy to have Santa in your home, he offers tips to keep the magic alive, from handing payment in a greeting card envelope to what backgrounds in your home make the best pictures. He starts booking in June to those wanting to make sure they snag “their” Santa, but as of late October, Santa Jerry does have availability during the week in December.
A home visit is not the only way to see Santa this year as Wise will be popping up in several Christmas events in the area such as Talbot County Parks and Recreation’s Skate with Santa on Dec. 8 and 9 as well as the Discover Easton’s celebration on Dec. 4. He’ll also be appearing at events at Fifer’s Orchard in Delaware.
You’ll also see him in several photographer’s Santa sets as well as “Breakfast with Santa” events in the area. With a schedule like that, it’s hard to believe he’s anyone but Santa.
Being part of so many lifelong memories is always an honor but still, there are some standout moments. In 2020, he served as the jolly fellow for the National Tree Lighting Ceremony during the Trump Administrtion. Though the in-person celebration was changed to being virtually streamed, Santa Jerry and Mrs. Claus were there by the tree, wishing all of America a very Merry Christmas.
Though Santa Jerry knows he is not the “reason for the season,” he says he aims to bring joy and wonder to children in the Mid-shore region and beyond. To book Santa Jerry or to find where you can see him, visit santawarmstheheart.com.

Learning to return to our food roots

Construct wooden decorations for your garden