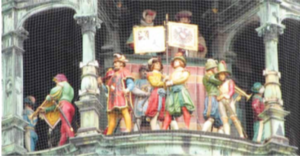 Th e Rauthaus-Glockenspiel clock dates back to around 1908, and was part of a new town hall construction in Munich.
It was a tourist attraction, chiming and re-enacting three times every day.
(Photo courtesy DeeDee Wood)

There is a giant mechanical, working clock in the plaza, or Marienplatz of Munich, Germany.

It is called the Rathaus-Glockenspiel, and it spins and moves and tells two different stories, high above the square, with life-sized wooden figures that move and perform three times a day.

The clock dates back to around 1908, and was part of a new town hall construction in Munich, a gingerbread Gothic Revival style.

It was a tourist attraction, chiming and re-enacting every day at 11 a.m., 12 p.m. and 5 p.m. It amuses a mass of tourists and locals who come to see the Glockenspiel tell two stories.

The entire clock consists of 43 bells and 32 life-sized figures.

The entire mechanical process takes around 15 minutes to play out for the crowds, rising above the plaza in a 260 foot tower, spinning and singing, dancing and moving.

The top half of the clock tells the tale of Duke Wilhelm V, famous for founding the world-famous Hofbraushaus, or beer hall, and his marriage to the lovely Renata of Lorraine.

There is a joust re-enacted, with the opposing parties representing knights of life-sized stature, ghting on horseback, representing Bavaria and Lothingen.

The Bavarians always win in the tale that the clock plays out daily, since the Duke was a local and Bavarian.

The original wedding that this clock represents took place on this very Marienplatz, or plaza, and lasted two weeks, including revelers and drinking, as well as dining and ultimately this famous joust.

The second half, the bottom section of the clock, includes a story about Schafflertanz, or coopers’ dance.

In 1517, the plague was upon Munich. The coopers (makers of casks and barrels) were said to have danced in the streets to bring vitality and health to the city.

Their dancing symbolizes their loyalty to the Duke in extremely hard times, hope of getting through the plague, and survival in the face of death.

Every seven years this dance is also performed live in Munich, as a part of a tradition for the city to never forget the survival of the terrible plague, a tradition dating back to 1700.

At the end of the performance by the mechanical clock, a little golden rooster comes out and chirps three times, ending the noise and movement.

But, rest assured, it will happen all over again the next day, at 11 a.m. sharp.

At 9 p.m. two small figures, an angel and a night watchman, appear below the clock’s face.

Many wars have been fought in Europe, and especially hit hard was Germany in World War II. Miraculously, the Rauthaus-Glockenspiel was not damaged during the horrible fighting, even though nearby rooftops were blown off.

The Rauthaus-Glockenspiel is a wonderful example of a German-made mechanical clock that thrills audiences with its entirely mechanical composition, music and movement.

For all of our technology and advancements in the world, old antique wonders like this one still do not fail to amaze what human ingenuity can produce and achieve.

(Editor’s note: DeeDee Wood is the store manager at Tharpe Antiques, in Easton, part of the Talbot Historical Society.)

The poison of arsenic in Victorian era