Winter is the time we wear more clothes to keep our bodies warm, but have you ever looked at the color of your winter clothes, or maybe even a vintage piece of clothing you’ve bought in an antique store, and wondered where the colors originated.
Before the Industrial Revolution, many clothing dyes were made out of colorants found in nature.
Botanicals and other plants made clothing come to life, as well as coal, mud or dirt from different regions, and clay and natural dyes from rocks and minerals were the only sources to dye cotton, linen and other wool blends. Animal by-products, bark and other sources of nature were also used from the Neolithic period to Egyptian times and forward to Victorian times.
Seeds, minerals, roots and botanical plant sources, as well as insects and snails were some of the first dyes found in archeological digs. These early “dyes” were not bright, but, rather, had pigments in them that could fade over time. 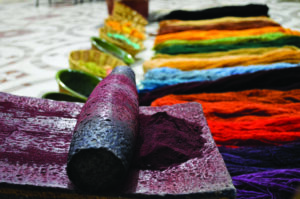 The endeavor to make colors stay is something in the garment world known as lightfast.
To achieve a more permanent bond to ancient clothing, chemical bonding had to occur, and iron, copper, tin and other sulfates were used to find natural sources to achieve longevity.
It didn’t work in some cases, and early dyed clothing faded over time.
Some of the colors produced from natural processes involved yellow from herbal plants and minerals such as iron, red from roots and minerals, blue from woad and indigo flowering plants, green from minerals and brown from clay and dirt. Black was obtained from coal and burning of organic materials.
White could be achieved by using natural chalk, as well as minerals. There are many examples from the Stone Age forward in history of experimentation, binders and cloth dyed with natural substances before synthetics were discovered. The history of each color is a long one, but mainly herbs, plants, insects, animals, clay and minerals were used to obtain the world’s first clothing colorants.
Purple was one of the first dyes that was indicated for royalty. Sea snails were used by Phoenicians, and later, ancient Byzantium and Medieval Europe, to indicate royalty.
This purple colorant, which was derived from this snail, took a massive amount of these mollusks to be sacrificed, and the lower classes could simply not afford such luxury in the process of dyeing cloth. Clergy also wore purple to indicate their higher status in society, as well as a relation to a more Godly atmosphere and realm.
In the 1850s, a British scientist, William Henry Perkins, while researching malaria medicinal cures, inadvertently discovered the chemical process of aniline dye, and mauve and then purple were produced from the world’s first synthetic dye.
Aniline dye derives from coal tar, and the chemical process produced a synthetic chemical that had much more lightfastness qualities that enabled clothing to be brighter and retain color better than the natural world of dyes.
Blue, purple, mauve, yellow, red, green and other colors started to become chemical in nature, and synthetic, so by Victorian times, coupled with the Industrial Revolution, clothing options and availability to the masses became more of a reality.
During the time period of the introduction of aniline and other synthetic dyes, most were made in Germany, a strong force in the world chemical trade. During World War I, with the shortages of common goods and trading blockades, the United States created their own products, such as RIT dye, a standard now in clothing dyes, invented in the early 1900s. It was widely distributed for use by American scientists that saw the need to create more readily available chemicals to fill the gap in the blockade of chemical dyes war produced.
Synthetic dyes were not without their dangers. Arsenic, a byproduct of green clothing, could leach into the skin and cause illness over time. Blue and magenta also had arsenic contained within the process of dyeing. Coal tar, used to make many colors, such as blue and purple, also stayed within clothing and caused skin issues.
The lack of knowledge of washing frequency, chemical processes, interactions of the elements chart and more led to safety and health risks that went hand in hand with the industrial processes that accelerated the synthetic materials of this era of exploration.
Clothing dyes began their existence with the need for embellishment, cultural representation, ornamentation and the use of the natural world to achieve those goals. As exploration and invention, accompanied by ingenuity and marketing to the masses grew, clothing and the colorants that provided color moved from the natural world to a chemical-based one.
Recently, a resurgence for natural dyes provide some insight into humans going back to their roots, literally, and exploring new and old ways to represent color in what we wear and put on our bodies for identity.

History and valuation of comic books