Unusual Christmas tree ornaments of the past 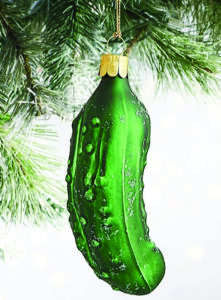 According to lore, whoever finds the Christmas pickle hidden in the tree would receive an extra present, and would have good fortune throughout the year. (Photo courtesy DeeDee Wood)

Christmas tree ornaments always bring back a bit of nostalgia and Christmas memories when they are brought out from storage each year.
Tree ornaments for this season have a long history, and some of the materials used and manufacturing processes are quite interesting, thus putting them into the category of unusual historic Christmas tree ornaments in the antique market.
Many of the early Christmas tree ornaments that are antiques today came from Germany.
“Dresdens” were three-dimensional cardboard creations, using damp cardboard to mold and press forms into shapes.
These shapes were later assembled, embossed, painted, and added onto to create the desired effect.
Popular themes were animals, Christmas themes, musical instruments and nature-themed ideas.
The name comes from the Dresen-Leipzig area in Germany in which they were manufactured, from a time period of around 1880 to World War II.
Cardboard degrades over time, so there aren’t many Dresdens left in the world. This makes them highly collectible.
Cotton batting Victorian ornaments are also highly collectible, and also have origins in Germany.
Cotton batting was taken and hand-molded around wired forms, spinning tight so they could be painted and decorated.
Popular themes included fruits and vegetables, cherubs and an early version of Santa Clause.
Early Victorian Christmas trees of the late 19th century would be adorned with hanging cotton fruits, such as delicately painted blushed pears, apples and grape clusters.
In later years of manufacturing in Europe, cotton was put on a lathe and molds were tightly spun into a variety of shapes.
It was thought that cotton creations were also more child-friendly, as children could touch and play with this ornament without causing harm.
These antique ornaments are very valuable, and original ones are hard to find.
Indented antique Christmas ornaments were decorations created in times when candles were used on Christmas trees instead of electric lights.
They had a faceted indention in the middle of the glass ornament, designed to reflect the light and refract and display sparkle and illumination on the tree.
The indention was usually one-sided, so the ornament had to be displayed with the faceted area facing the candles on the tree.
These were also mainly manufactured in Europe in the 1800s, and later they had a mid-century come back, as people longed for more nostalgic Christmas ideas.
Both versions still sell well today.
Unsilvered Christmas ornaments were matte ornaments made during war time rationing in the 1940s.
Metal, in any form, was needed for the tides of war, so manufacturers had to get creative.
They would create paint-like effects on the outside of glass bulbs, often causing a matte effect (there wasn’t enough metal available at the time to coat the inside, which was the traditional method), and the hangers had to be paper, not metal.
These unique ornaments are not sought for beauty, but, rather, for their time period in history.
They are sold for profitable returns in the antique market.
Last but not least in our journey through unusual antique Christmas tree ornaments would be the Christmas pickle.
An ornament, shaped like a pickle, is hidden somewhere on the tree.
The finder of the pickle on Christmas morning would receive an extra present from Santa, and would have good fortune throughout the year.
The origins of this story are unknown and undocumented.
Some say it is rooted in some truth from old folktale legends of the Victorian era, when pickles were placed in barrels and cured. Some point to a Civil War legend involving an officer being given a pickle to prevent starvation in a prison camp, and others saying the pickle is a European custom of good luck, as it is the symbol of a preservation of food, and not going without stored pantries.
Whatever the origin, it certainly is an interesting tradition that began in the late 18th century and continues to this day.
Christmas trees constantly evolve, have additions, subtractions and remakes each year.
Many people do not stop to think or consider the contents and processes used to create antique ornaments.
The unique creations of a by-gone era and the nostalgia and excitement created by these unusual antiques fuels interest, historical research and appreciation of an important, explorative era in manufacturing.