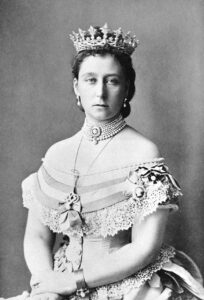 Princess Alice wore the tiara her father had created on her wedding day without her departed father present and would also wear it on special royal occasions.

The Haunted Hesse Tiara was designed by Prince Albert, Queen Victoria’s husband and consort.
It was to be a joyous wedding present for his daughter on her sacred wedding day, but the tale of the glimmering nightmare reached far beyond the day of vows and into the history books as one of the world’s most haunted pieces of jewelry.
The tiara was designed for Princess Alice by her father, Prince Albert. He never attended the wedding, for he passed away before it could take place, and the tiara was instead given to the couple, Alice and Louis IV, by the grieving Queen Victoria. It was said to be very beautiful, with many diamonds, spires, foliage and more. It was full of Prince Albert’s energy, a man that was grieved for the rest of the Queen’s days.
Alice, now the Grand Duchess of Hesse and by Rhine, indeed wore the tiara on her wedding day without her departed father present and would also wear it on special royal occasions.
She had seven children with her husband, and in 1878, many of the family fell ill with diphtheria. Alice lost her youngest daughter, and she herself also died, on her father’s same death anniversary date, which some blamed on the tiara, and the curse began.
The next participant in the curse of the Strawberry Leaf Tiara was Princess Victoria Melita of Edinburgh, who married her first cousin and son of Princess Alice, his royal highness Ernest. She wore the tiara to the coronation of Tsar Nicholas II, who later famously lost his life in a brutal execution in Russia, that included his entire family. Their daughter died of typhoid in 1903. Victoria Melita would remarry after a divorce, to her cousin, who would lose all of his wealth in World War I.
HRH Ernest also remarried after his divorce from Victoria Melita, after Queen Victoria passed away. He didn’t fare much better, losing his throne and fortune to the first World War. All that remained in his asset coffer were a few jewels, and, the Strawberry Hesse Tiara.
The next recipient of the tiara was Grand Duke Georg Donatus. He married a Greek princess, Cecilie, who was the great-granddaughter of Princess Alice. In 1931, after they wed, she wore the piece to many events, including the coronation of King George VI.
Perhaps in the most shocking part of the curse, in 1937, Duke Georg and Cecilie were on board a flight to London, to attend a family wedding. Cecilie was very pregnant and went into labor on the flight.
The plane crashed while trying to land in Belgium, Cecilie gave birth to her child, and all occupants on the plane that fateful day died in the fiery crash. Strangely, the tiara survived the crash in a strongbox.
The next poor soul to come into contact with the cursed item was Louis, last Grand Duke of Hesse, and his wife, Margaret. They adopt ed Princess Johanna, daughter of the late Georg and Cecilie.
She met her end two years later, the victim of meningitis. Being that the couple had no other children, it is said that the tiara now is tucked away quietly by the House of Hesse in a vault, being last seen for some photographs for a book on tiaras in 2002.
Whether you believe in curses or haunted objects, one must admit the Strawberry Tiara had a strange, winding path of destruction, touching lives that were ended with sickness, accidents and loss of fortune. What secrets does it hold in the vault in which it is contained, waiting for the next royal head to sit upon, on the throne of history and fortune?
(Editor’s note: DeeDee Wood is the owner of Black Cat Curiosities, an online antiques research and sales venue.)