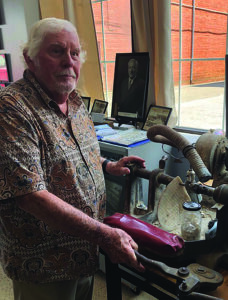 Part Three of our Three Part Eastern Shore Antique Roadtrip Series brings us out to Federalsburg, Md., located in Caroline County, near the Delaware border.
There was once a thriving mother-of-pearl button industry here, employing hundreds of people in the town and producing some of the most exquisite buttons still collected in the antiques world today.
Excelsior Pearl Works, with headquarters in New York, had a satellite office in Federalsburg, Maryland, among other locations, beginning in March of 1930.
They imported shells from the Pacific Ocean with the mother-of-pearl inlay so important to produce Pearl Works buttons.
Styles and motifs changed through the years, but the idea was always the same-produce buttons out of the materials obtained and imported for their beauty.
Buttons were an important component of clothing and closure during this era.
The factory made 144,000,000 buttons a year and shipped them all over the United States.
The buttons created much debris and dust, and this waste was distributed around town, lining sidewalks, covering the beach in areas, and especially aiding in the foundation of the local ballpark/stadium.
In fact, this dust was the inspiration for the early baseball team name, “The Federalsburg Button Dusters.”
Tom Daffin, a long-time docent at the Federalsburg Historical Society, showed me around the museum.
“My grandmother, Bessie Butler, worked at Excelsior Pearl Works,” Mr. Daffin shared, obviously beaming with pride. “She worked in what we’d call today quality control. As the buttons streamed down to them on a conveyor belt, she had one long fingernail on her pinkie, and would flick any bad buttons off onto the floor with that nail.”
The Federalsburg Historical Society has an old machine that showed a shell attached to one handle, and a sort of punch lever that would punch out the shape of the button on the other.
They also have a display of a lamp, made out of the buttons, a sign indicating the raw shells were shipped in mahogany wood crates, and that the wood was used in other recycled objects around town.
There are also wonderful photos of the factory and the past residents hard at work at the factory, which apparently still stands as a building in town.
Jim Truitt, another long-time docent of the museum, showed me how the machine would work back in those days.
There were polishing, decorating, quality control, sorting, weighing, packing and logistic departments, just to name a few.
The buttons had many motifs with the pearl, luminescent lure to them, including standard button designs, shapes, animals, nautical themes and more.
There were also novelty items made, such as jewelry, knives, hairbrush handles and trinkets.
“The button factory operated throughout World War II,” Mr. Truitt explained to me. “They needed shells from the Pacific Ocean, due to the great mother-of-pearl on those shells, but that wasn’t possible during the war, so Excelsior tried to import shells from the Atlantic Ocean. Those shells didn’t have the same beauty and endurance as the Pacific shells.”
The button factory employed hundreds of Federalsburg residents over the years and pumped funds into the local economy through this employment.
There are many fond memories of this thriving factory, a warm reminder of yesteryear’s fruits of labor.
The museum docents told me that when the whistle blew to indicate the day was over at the factory, you would see a sea of people flooding the streets in that area of town as operations shut down for the night.
“It was obvious the factory was letting out, and there was a huge portion of the community there,” Mr. Daffin explained.
In the 1950s the pearl button industry in the United States began to decline.
Cheap, plastic buttons were being produced in other parts of the world and imported for a lower cost than a U.S. factory could compete with in those times.
Fashions changed, button styles changed with clothing changes of the ’50s and ’60s, and the button factory eventually shut down operations as it merged with a local plastics manufacturer to produce different items for an ever-changing world of consumer demand.
The Federalsburg Area Historical Museum and Society is located at 100 Covey Williams Alley, in Federalsburg, Md. Its hours of operation are Friday and Saturday, 10 a.m. to 2 p.m.
On display are many objects from the area, including a wonderful exhibit of buttons, photographs, machinery and more information on the button industry that was once a thriving source of revenue for this small town.