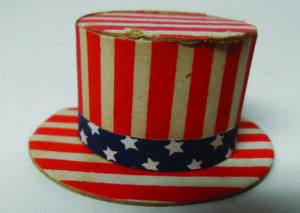 The collecting of patriotic items will forever be of interest to Americans and supporters of freedom.

The Fourth of July brings up memories of cookouts, fireworks, red, white and blue clothing and summer gatherings.
In the antiques market, many items were made to accompany not only personal events, but milestones and celebrations in our nation’s history.
Our national anthem, the Star Spangled Banner, and the celebration of our American flag, was written in 1814 by Francis Scott Key, who was a prisoner of war, and looked to the flag as a symbol of hope.
As a prisoner of Ft. McHenry, he knew as long as he could see the American flag out his cell window, there was still hope that we had not fallen to the British.
His classic lyrics promoted even more adoration for the red, white and blue symbol, and in the antiques market flags with the circle of original 13 colonies, old 1800s flags and flags of war are popular in the vintage themes of an old fashioned fourth.
One cannot think of the holiday of patriots without missives written back and forth, and the postcard was created. Many Uncle Sam and firework display postcards are traded and collected among antique afficionados.
Themes such as patriotic children, sailing boats with lady liberty, war postcards of patriotism, rockets and fireworks blasts and many more adorn cards that were mailed back and forth to Americans.
Many United States citizens had no other means of communication except the U.S. postage service in the days of antiquity, so postcards are a common, collectible means of visually understanding the joy of this patriotic holiday.
Old time clothing of red, white and blue is collected by antique dealers and buyers.
The Suffragettes wore white as their symbol of the rights to vote for women, but they also wore red, white and blue, and their clothing and patriotic banners are collected for the Fourth of July theme.
Other clothing, as well, are a good vintage collectible, such as vintage bathing suits, jackets, shoes, scarves and hats.
Fireworks are a central them of the celebration of this American holiday, and antique boxes, advertisements, catalogues and even old unlit fireworks themselves are for sale.
There are laws regarding buying unlit, live fireworks, called “pyrobilia”, so checking with state regulations is always a good idea before purchasing such items.
Class “C” fireworks are some of the most popular fireworks collected, as they are not longer made in the U.S. Items with names such as Zenith Bombs, Longhorns, Roman Candles, Cherry Bombs and Acme Sparklers are just a few names you might run across in the market.
The competition is fierce for trading and buying old time Fourth of July antique fireworks, so keeping a keen eye on auctions and opportunities is important.
Many people collect Statue of Liberty items and 1776-1976 Bicentennial 4th of July items.
Statues, pins, buttons, signs, books and more representing the Statue of Liberty and the bicentennial are all popular items for collectors as they look for Fourth of July themed patriotic items.
The author of the poem “The New Colossus” (“Give me your tired, your poor, your huddled masses yearning to breathe free …”), Emma Lazarus, wrote this poem in 1883 to raise money for the construction of the pedestal of the statue.
Many people collect books regarding her, including her endeavors and biography.
The Statue of Liberty also has many collectibles and antiques that surround the statue and there are many enthusiastic fans surrounding this enduring symbol of freedom.
Other items of interest when collecting patriotic Fourth of July items include campaign buttons, pins and stickers, Civil War items (which is a vast treasure trove, best left to its own article), furniture, jewelry, lawn ornaments, needlework and fiber arts, old records and recordings for record players and phonographs and commemorative items of décor.
The collecting of patriotic items will forever be of interest to Americans and supporters of freedom, as symbols of this great land are immortalized in antiques and history, through song, poems, engravings, statues and colorful reminders of what we hold dear.

History of the inkwell