When Germans immigrated to Pennsylvania in the United States during the late 1600s and early 1700s, they brought with them their traditions of folk art that are so iconic today.
One of the more interesting creations that they endeavored to pursue were Frakturs, a very artistic, illuminated script writing in Latin that also included pictorial scenes, named for the Fraktur script which they used to write messages in blackletter calligraphy. 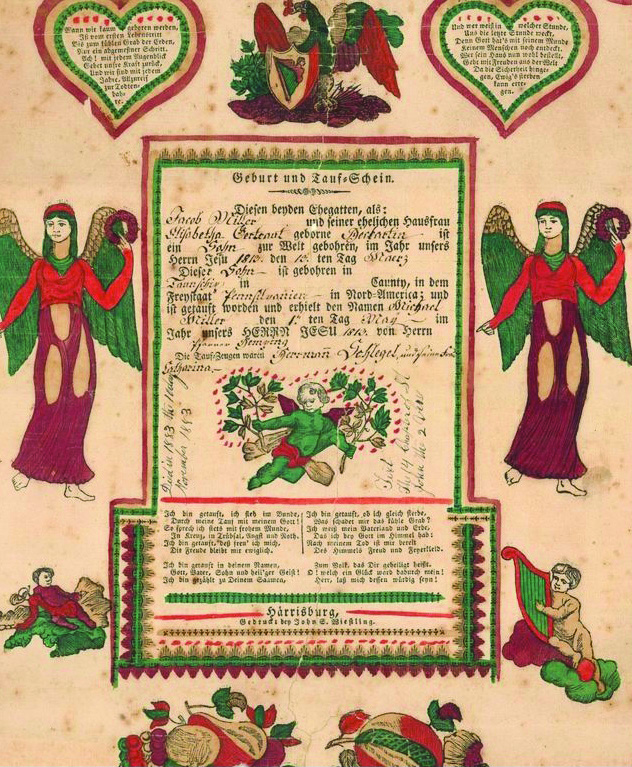 These early immigrants settled very closely together and brought their traditions with them, including their heritage.
Their dialects and customs of speaking formed the Pennsylvania Dutch language and Pennsylvania German folk art and culture.
These traditions touched many parts of their lives, including food, speech, church, and their famous folk art tradition of Frakturs, a very traditional style of art and writing.
Most of the Frakturs that have been documented were created between 1740 and 1860.
They were mainly watercolors and ink, usually on paper, highlighting special occasions, represented with the typical Latin blackletter styles of calligraphy and illuminated pictorial scenes.
Floral symbology, figures and elaborate designs and mementos of special occasions were all represented.
The use of illuminated manuscripts of writing refers to the pre-printing era when words and symbols were decorated and designed in high detail, by hand, utilizing bright colors and themes, and focusing on the flowing calligraphy of script.
Illuminated manuscripts hold ancient traditions that have roots in Medieval Europe and the courts of royalty. Monasteries, which were some of the first recorders of historical events on paper, utilized this type of documentation.
Frakturs were generally documents that were utilitarian in nature while they were also celebratory artworks as well. Births, baptisms, blessing of new homes, weddings and other important life markers were all documented with these highly stylized, flowing calligraphy-enhanced, Latin-based artworks.
The term Fraktur refers to an early German typeface, created in the 16th century, known as “blackletter,” a style of writing that utilized dark, bold, italic calligraphy, enhanced by pictorial additions.
Some common themes for the Fraktur artwork inlcuded tulips, angelic themes, many varieties of animals, birds, geometric patterning, mythical creatures, and recreations of old Germanic folk tales.
Birds were also used in many forms, including representations of spring, rebirth and fancy.
Because of the age and rarity of authentic Frakturs from this time period of immigration of Germans to Pennsylvania, they are a highly sought-after antique and piece of history.
Major museums, such as the Philadelphia Museum of Art, American Folk Art Museum and the Metropolitan Museum of Art have Fraktur collections in their museums, and allow patrons to study them and glean valuable immigration information off of them as well.
Frakturs are a representation of a people and their culture. A traditional folk art, Frakturs represent not only the ancient calligraphy techniques, Latin-based themes in ancient writing, and folk art traditions, but they also record history.
The documentation of births and deaths, weddings, announcements and celebrations tell a story of a particular group of people and their lives as their immigration formed a new life for them in a new place, far from home, but including important traditions.
(Editor’s note: DeeDee Wood is the owner of Black Cat Curiosities, an online antiques research and sales venue.)