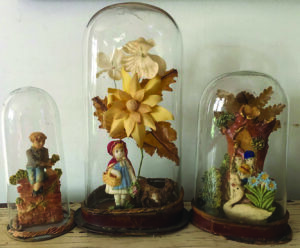 Wax was often used in three-dimensional creations under domes because it was easy to warm and mold, lasted a long time, and could be cut, colored and bleached to fit the desired effect of the scene. (Photo by DeeDee Wood)

The Victorians liked to put miniature worlds under glass. Known as the bell jar, parlor jar or parlor shade, they intrigued the viewer and brought wonder into the home.
Although for many occasions and whimsy, there is a particular style of jar that was strictly given on Valentine’s Day, and depicted that theme.
With newly discovered scientific theories, the Industrial Revolution making travel more readily available, and the macabre, curious senses of the Victorians, one can understand the desire to put miniature, intriguing worlds of discovery and nature under a dome in diorama form.
Valentines, among a vast amount of other things, were put as a miniature display under glass.
Scenes of cupid, floral arrangements, fruits, hearts, fragments of the natural world and other tangible goods were fashioned into scenes of a 3D nature that were transformed into tiny world under glass domes, set usually on wooden bases.
The idea was to intrigue, fascinate, and draw the viewer into a world that could not be touched, but considered through the layer that separated worlds.
Wax was often used in these three dimensional creations under domes because it was easy to warm and mold, lasted a long time, and could be cut, colored and bleached to fit the desired effect of the scene.
Beeswax was already a well known medium in the art world, contributing to making an encaustic painting, as well as Renaissance religious effigies of wax in churches.
In the late 18th century, and well into the 19th century, wax was used in Europe to depict small portraits of people who could afford such delicacies, such as royalty figures or people of prominence.
These 3D Victorian valentines also had other elements used in their creation.
Silk flowers, wooden parts, feathers, bones, paper, seeds, taxidermy, wired armatures and even human hair all added to the desired dimensional diorama being created by artisans.
The domes of glass covering the creation, also known as shades, were hand blown and made to fit onto a base, usually of wood.
Victorian valentines, as an original item we know, were mainly paper, but with the invention and creation of worlds of flowers and nature, the existence and sharing of a 3D declarations of love in a lasting diorama became quite popular.
The idea of having an everlasting floral arrangement or of fruits that never rotted under glass intrigued the artists who made them — and fascinated the recipients of such a gift.
Much like curiosities or novelties of modern times, these creations were also a wonder and stimulated wonder and amazement, as well as lasting forever under a dome.
Parlor shades for Valentine’s Day purposes conveyed a miniature world of love that could never die, wilt, fade or be tarnished.
All Victorian domes reflected human desire and wonder under glass, in unrealistic worlds that last the test of time.
(Editor’s note: DeeDee Wood is the owner of Black Cat Curiosities, an online antiques research and sales venue.)