Since the dawn of time, people have tried to illuminate the darkness with an artificial source of light.
As an alternative to candles, the oil lamp was used to provide a continuous source of fuel to a flame to help keep the darkness at bay.
There have been many different types of oil lamps constructed over time, and many different fuel sources and techniques to keep them burning.
There are many different sizes, shapes and materials used in the history of the oil lamp, but the constant in all of these are the general parts or anatomy of the lamp.
You must have fuel, a wick to light the lamp with flame, a body in the vessel to hold the reserve of fuel and oxygen to keep the lamp burning. 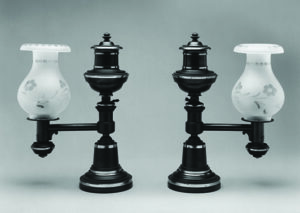 If these necessary components are all present, the flame should hold and burn until the supply of combustion is extinguished or empty.
The earliest known “oil” lamps were used by stone age people, and consisted of a simple design of stones with depressions filled with animal fat that was burned in the stone.
By the 16th century, illuminators were using clay bowls filled with oil that was burned with a floating wick.
This idea was expanded upon and a “cocked hat” component was added to the round bowl, giving it a look of a tipped hat, where a wick could be added to the vessel and the flame could be more controlled.
Clay bodies that were used in early oil lamps all over the world had a problem, in that clay can be porous, and oil can seep into the container and eventually break it down.
The early Greeks put a slip on their clay, basically creating a glass surround to the clay when fired, and the oil was more contained. Greece traded their lamps all of the Mediterranean and this idea became a popular way not to waste fuel.
As metalworking became more popular in civilizations such as Rome and the Byzantine period of history, in the 17th and 18th centuries, metallurgy allowed for more reliable, metal lamp bodies to hold more oil, leak less, and burn longer.
There were many developments in oil lamps over time from the 16th to 18th centuries all over the world.
Lamps were also used not only to light the night, but for ritualistic, religious and entertainment purposes.
Religious temples in Egypt, China and India utilized oil lamps for offerings, votives and communication with deities.
In ancient Rome, oil lamps were buried with the dead, as it was thought the spirit needed light to guide their way to the great beyond.
The Chinese would use oil lamps in outdoor theatrical and political performances, and even maritime sailors would use an oil lamp to guide their ships in the night, communicating to other boats with signals from their lamps.
The possibilities and uses for the basic oil lamp and its reservoir of fuel were endless.
Fuel and wicks for the vessels had as much variety as the body of the lamp itself.
Beeswax, animal fat, plant oils, (such as olive and grape seed oil) were used to keep the flame aglow.
The wicks came in many varieties as well, such as linen and a wide assortment of plant fibers, as well as papyrus.
The discussion of oil lamps could have an entire article written on just whale oil.
In the 1700s through the 1800s, whale oil was popular for clean burning and an odorless smell. Due to over-hunting and the myriad of expense and demand for this type of oil, alternative fuels were eventually sought.
In the antiques world, some of the most popular antique whale oil lamps were made out of sandwich glass, a type of pressed glass that could safely hold the oil.
In the 18th century, Swiss chemist Aime Argand made the Argand lamp, an oil lamp that had a central wick with a more stable flame and a glass cylinder chimney which made the entire lamp encased, safer and more portable.
Individuals that worked in the mining industry utilized oil lamps such as these, because combustible materials from later times, such as kerosene, could be dangerous to use around flammable materials.
By the 18th century, oil lamps were being replaced with kerosene lamps, a fuel derived from coal and later, petroleum.
It was the end of an era for clay vessels, metal burners and crude, heavy glass vessels.
The lighting world would go from candles to oil, a pathway from kerosene to gas, and eventually electricity.
Ancient mariners lighting their ships at night with an oil lamp, or an ancient Egyptian lighting their path with a crude, ancient clay vessel would marvel at the advancements and journey lighting up the night would take in the world of lighting.