Bokashi is enjoying a revival 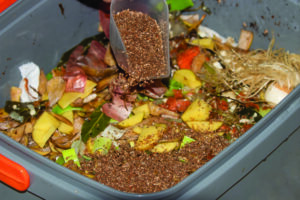 Used for centuries in the Far East (notably Japan and Korea), Bokashi is essentially a pre-composting process using a microbial “starter” material to ferment food waste in an airtight container.

Composting has become a household word, thanks to patient but proactive home gardeners who are seeking a natural soil supplement and hoping to keep food waste from landfills.
Composting is characterized by the U.S. Environmental Protection Agency as a process using so-called green (nitrogen rich) and brown (carbon rich) materials gleaned from kitchen, home, and yard piled in layers, incorporating air and liquid over an extended time, to achieve a desirable pile of fluffy, fertile soil additive.
But not all home gardeners hoping to adopt composting have found it to be as user-friendly of a process as they had hoped.
Often, a compost pile, or set of adjoining piles, requires an extended chunk of time, up to several months, to see results, plus a convenient outdoor space. While a simple setup is possible for those with basic construction know how, frugal foraging skills and free project time, many beginners want to start off strong with a purchased container unit whose contents can be readily turned over. This may be beyond the price range beginning gardeners want, or are able to invest.
For gardeners such as these, the word Bokashi may one day reach byword status, too. Promising a faster, simpler, space saving way to convert just about all food waste, including meat and dairy products, Bokashi has been popping up on Google searches of sustainable gardening websites. And just last month, the Associated Press published a column discussing its considerable merits, bringing it an even wider degree of awareness.
Used for centuries in the Far East (notably Japan and Korea), Bokashi is essentially a pre-composting process using a microbial “starter” material to ferment food waste in an airtight container.
Some Bokashi practitioners, including San Diego’s Solana Center for Environmental Innovation (describe it as a way of essentially pickling all organic food waste, including meat, dairy, and fats, which are off limits in regular composting.
Developed in Japan and used in Asia, the process uses lactobacillus bacteria to predigest waste matter, decreasing decomposition time. The overall process is like yogurt, cheese, and even sauerkraut.
Among Bokashi’s benefits, the center cites: a more nutrient and organic matter rich product, easily composting any organic matter including proteins, no greenhouse gases are generated, no heavy physical turning required, all nutrients and by-products produced stay within a sealed container (minimizing rodent and insect issues), until ready for garden use, and its smaller footprint makes it user friendly for those in apartments.
The Solana center also explains the meaning behind “Bokashi bran,” calling it a “complex blend of bacteria and yeast which, when applied to kitchen waste and kept in an anaerobic environment will outcompete all the other microbes (like mold) which grow on decomposing scraps. It’s made by inoculating any number of a wide variety of grains, hulls, or grass-like substances, including spent beer grains, bran, or wheat) with effective microorganisms.
On his Smiling Gardener Academy website, organic practitioner Phil Nauta includes background on the development of Effective Microorganisms, EM, which serve as Bokashi’s critical operating factor, and a 10-step instructional primer on using Bokashi.
The method of fermenting carbon-rich organic matter with EM which we now call Bokashi comes courtesy of Japanese agricultural professor Dr. Teruo Higo, an accidental outgrowth of his work with microorganisms at the University of the Ryukus in Okinawa, Japan during the 1960s and 70s, Nauta noted, exploring a single microorganism at a time, as was then the norm.
When he accidentally spilled a mixture of microorganisms on a plant, he noticed how much better it grew after the mishap. Following up, he began working to develop the most effective microorganism mixture, which became known as EM, and became the basis for modern Bokashi.
In Japan, Bokashi traditionally uses the material left over from the processing of white rice, its bran hull, as what Nauta calls the “carbon rich substrate of choice” to be inoculated by EM. However, other materials work just as well, including “wheat bran, sawdust, mulched leaves, chopped-up straw, any finely chopped carbonaceous material,” he noted.
While nutritionally null when standing alone, after EM fermentation transformed into “potent microbial inoculants,” Nauta added. “It’s not quite compost yet, because the substrate hasn’t been broken down far enough, but even partially fermented, its swarming with those beneficial EM microbes.”
As such, its possible to use the fermented material as mulch or soil amendment, he mentioned, but mainly used for fermenting kitchen scraps before eventually burying them within the garden itself or compost, he advised.
“Apparently, other sources of Lactobacillus will also work to make bokashi, but I’ve always used EM, which I always have on hand for many uses,” he said.
Pre-configured 5-pound Bokashi bins outfitted with airtight lids and spigots for releasing the “Bokashi tea” liquid byproduct can be purchased, and usually include a bag of starter Bokashi bran.
But Nauta has come up with several simple, inexpensive methods of improvising a similar container. He’s also developed his own essential microbial mixture.
Creating a Bokashi soil supplement stash can take as little as a week or two, which works well for gardeners in year-round warmer climates. But for those living where the ground freezes, the fermented material can be safely kept and stored in a tightly covered can in a garage until the Spring thaw, when able to dig a hole or trench in the garden. But it can also readily be incorporated into the soil of houseplant containers.
For more information visit https://solanacenter.org/bokashi-method/ and https://smilinggardener.com.

A rose by any other name …

Dream rose garden worth the effort