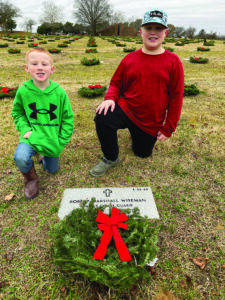 Trevor Geer, right, and his brother Tucker, kneel at the grave of their great grandfather, Robert Marshall Wiseman, a U.S. Coast Guard veteran, who died in 2018. (Photo courtesy Sarah Geer)

During the holidays, it’s common for relatives to visit the graves of loved ones and beautify the resting places with flowers, ornaments and wreaths.
For the last five years, Dorchester County youngster Trevor Geer and his family have placed wreaths at the graves of people he never met.
Trevor found out about a wreath-laying event at the Maryland’s Eastern Shore Veterans Cemetery in Hurlock and attended with his mother Sarah. Noticing some graves did not have a wreath, he turned to his mother.
“Mom, that’s not fair,” he said. “These people fought for our country and they deserve one.”
That moment spurred the youth to start Trevor’s Heroes, the Geer family’s efforts to reach full coverage of the cemetery with wreaths through Wreaths Across America. It all goes to honor the brave men and women who served their country.
Trevor’s Heroes started in 2017 raising money through a lemonade stand and a yard sale and earned enough to buy 90 wreaths.
“Every single person who stopped was told what the money we made was going towards,” Sarah said.
The money raised goes to Wreaths Across America, which coordinates wreath-laying ceremonies at Arlington National Cemetery, as well as at more than 3,400 additional locations in all 50 U.S. states, at sea and abroad. WAA’s annual pilgrimage from Harrington, Maine to Arlington National Cemetery has become known as the world’s largest veterans’ parade, stopping at schools, monuments, veterans’ homes and communities all along the way to remind people how important it is to remember, honor and teach.
Trevor’s Heroes is based on the Hurlock cemetery, but they also place wreaths at the small Virginia cemetery where Sarah’s grandfather, a World War II veteran, is buried and also visit cemeteries in Pocomoke Brookview and Cambridge to honor veterans there.
The many fundraising groups for the Hurlock cemetery have achieved full coverage for this holiday season, Sarah added, but the mission continues. Cemeteries in Goldsboro, Crownsville and elsewhere still have graves needing wreaths.
Visit www.wreathsacrossAmerica.org/MD0312 to learn more about Trevor’s Heroes.
“It’s our goal to give every Veteran buried in a private cemetery a wreath one day,” Sarah said. “We have been so fortunate because it started with my family purchasing wreaths locally, to Mowbray’s Garden Center in Cambridge donating them to us, to raising enough money as a whole at MDESVC to being able to obtain them with the large load that comes in from Columbia Falls.”
With each year, Trevor’s efforts grew, enabling him to buy more wreaths. Then the COVID-19 pandemic hit, changing his approach entirely, but not his mission.
Instead of the lemonade stand and yard sales, the family reached out to area businesses and organizations asking them to contribute to buy wreaths.
Now with restrictions relaxed, they’ve been able to go back to their normal fundraising style while also reaching out to businesses, Sarah said.
This year, Trevor was recognized with WAA’s Learn Award, given to a young individual who has learned, and understands, the Wreaths Across America mission and incorporates it into their life, and demonstrates learning through action.
Trevor was nominated by several members of his community for this year’s award and selected by a volunteer committee of Gold Star Mothers to be this year’s recipient.
In receiving the award, he visited the group’s headquarters in Columbia Falls, Maine, to see how the wreaths and iconic red bows are made.
The Geers also went to the “tip lands” where tree tips are cut to make the wreaths, but “most humbling was tagging trees on the tip lands with Veterans names,” Sarah said. “We were so very fortunate to honor 10 veterans that day with their very own dog tags placed on trees that will eventually produce the wreaths that are shipped across the country.”
For the Geers, a wreath laying is more than placing the decoration. They first clean any debris away from the stone and say the soldier’s name.
“We want to respect them and having a clear area so that others can see their names is huge for us,” Sarah said. “It’s definitely a sight to see when a child develops such a respect for people he didn’t even know.”

How’s your game at wild cooking?