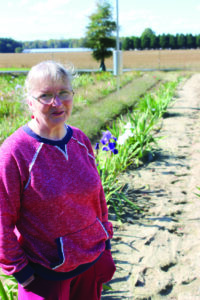 Pat McNeal greatly expanded her iris growing about 15 years ago after seeing how varied and beautiful the blooms could be. (Photo by Sean Clougherty)

For decades, Pat McNeal had the same dozen or so irises in her flowerbeds. She maintained the beds and plants just as she did the rest of her landscape.
But while tooling around the internet in 2007, she came across iris varieties she had never seen before and got hooked.
“When I got looking, I found them more and more beautiful and I decided I was tired of these same looking ones,” she said.
That sparked McNeal’s second and much more intensive phase of iris growing. She dug up the irises she had and sold them. She put that money toward a new group, about 70 new varieties and started her iris garden in a much bigger way. “It’s called the iris virus and people catch it all the time,” she said, smiling.
She also participated in the American Iris Society’s photo contest in 2008 and was awarded a membership which offered her a lot of resources on being a better grower.
She didn’t stop at just growing irises, though; she soon got into hybridizing, crossing two varieties to make her own completely new iris.
McNeal starts with growing irises from seed and says from her many crosses each year, usually one or two may be worth pursuing for an introduction. At the height of her growing years, she would start a year with 200-300 seedlings. From there it takes about 7 years to increase the rootstock and produce enough seedlings to make an introduction.
“They’re kind of like children. Some look like Mom and Dad. Some look like Grandpa from many years back,” she said. “They’re all going to be different. You want it to be improved over its parents. You want it to be a pretty flower.”
From 2008 until the COVID-19 pandemic, McNeal sold irises at the Easton Farmers Market.
“It was so nice and people went nuts over them,” she said of the market. A few customers even selected names for some of McNeal’s introductions.
McNeal says she hears often that iris’ aren’t good for cut flowers but argues they just need the spent blooms pinched off as they droop and other buds will continue to unfurl.
“You just take the bud off and it makes it look good as new,” she says.
In her years as a hybridizer, McNeal has carried five new irises to the introduction stage and expects two more for 2023 — Melissa’s Smile and Lavender Lustre.
This year was big. She introduced three irises, including a new brown iris named Harriet Tubman as her contribution to the 200th anniversary celebration of Tubman’s birth and her 2018 introduction, Champion Bloodlines, was selected as an Honorable Mention in the AIS’s Tall Bearded category.
The recognition puts Champion Bloodlines in contention for other awards. In two more years, it will be eligible for an Award of Merit then a Section Medal and then the top award in the American Iris Society, is the Dykes Medal.
“I’m just lucky,” she said. “I’m just thrilled that it got honorable mention. Each medal gets harder and harder to get.”
A few years ago, McNeal sold a significant amount of her iris inventory in an effort to scale back and focus more on hybridizing, she says. She has a particular interest in breeding “rebloomers.” There’s the challenge of it that intrigues her but they also have value in the marketplace.
“If you can breed that iris to bloom in the spring and again in the fall, that’s twice you get for your money,” she said.
McNeal says her Champion Bloodlines has rebloomed in other places but not at her own farm where it originated.
Fragrance is another aspect more hybridizers are working to breed in and the holy grail of iris breeding is a bright red bloom, she added.
McNeal is also revamping her iris garden to be one of three demonstration sites for when the Bayshore Iris Society hosts the Regional Fall Meeting in 2024.
“I just love irises. There’s just something about it. It’s easy to grow and there’s so much variety,” she says. “It just knocked my socks off for how beautiful they became.”

A plan to can is a plan for the future

‘I Seafood and Eat It,’ from SH&G staffers