In honor of February, two things can combine together in the antiques world to represent holidays in the month.
President’s Day and Valentine’s Day both are represented by the teddy bear, a toy that is often given as a love gift for Valentine’s Day, but also has its origin with President Theodore “Teddy” Roosevelt and a famous occurrence with a bear that started the famed toy, which is still made today.
He was on a bear hunting trip in Mississippi in 1902, along with Mississippi Gov. Andrew H. Longino.
Roosevelt, known as an outdoorsman and avid hunter, was not having luck with finding any bears that day. 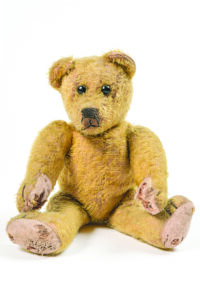 His assistant cornered a bear and subdued it, but the president, viewing this kind of hunting as unsportsmanlike, refused to shoot the animal.
This began the spreading of the story like wildfire and conjuring up all sorts of cartoons of him and innocent bears and representations and stories of the event.
One political cartoonist, Clifford Berryman, published his satirized cartoon in The Washington Post and it was seen by many, showing a comical Teddy Roosevelt holding up his hand, refusing to shoot a frightened bear.
A Brooklyn, N.Y., candy and novelty shop owner, Morris Michtom, developed an idea off of the cartoon and started manufacturing the “Teddy Bear,” which was a name which Roosevelt gave permission to use.
From the huge success of this “Teddy Bear,” Michtom went on to mass-produce the bear and developed the Ideal Toy Company from this effort.
These early bears were made to look like realistic bears, with realism in their face structure, snouts and eyes.
The early, original Brooklyn bear was covered in mohair, and those early Teddys were jointed, being produced in five or six parts, consisting of head, torso, arms and legs, jointed and sewn together by hand.
Unlike toy standards of today, the early bears had no safety standards, such as securely sewn eyes, choking warnings and more.
Because of unusual materials and age, the earliest 20th century “Teddy Bears” can go for a lot of money and trade in the antiques world.
Who would have guessed that a President of the United States would have started a toy trend with his depictions in cartoons of a hunting trip?
The plush, stuffed bear is a staple in the toy manufacturing business, and many vintage versions of this early, political bear can still be found in the world of antiques today.

Irish furniture: It’s all in the details