A brief history of wallpaper

Wallpaper can totally change the look of any room. Elegant sweeps of floral themes, animals, birds and scenes can transform an ordinary wall into something extraordinary
But what are the origins of this paper that adorns walls, and what historical journey can be told in the themes we still see today?
The Chinese invented wallpaper, having pasted rice papers on to walls in early dynasties of their history, some say as far back as the Qin dynasty.
As time and techniques progressed, linen fabric replace the rice paper, being a more durable substance that allowed printing and hand painting to become an easier task. By the 12th Century, due to the Silk Road and trade routes, the business of wallpaper as an adornment had increased. 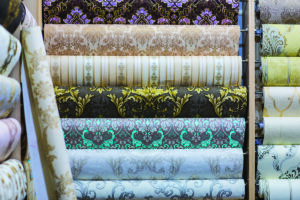 Some of the earliest European wallpaper came in the form of block printing, a technique that utilized wood blocks and ink, to form a repeating pattern on paper.
European tastes had always fancied large tapestries on walls, and wallpaper followed suite by having tapestry subject matter copied onto blocks and printed onto the paper, being often hand-colored and changed according to tastes.
This technique allowed households that could not afford large tapestries to still embody some of the subject matter and lesser looks in the form of block prints that mimicked images that could be found in damasks and rich fabrics of the time.
The first guild for wallpaper makers was created in France in 1599.
The French came to dominate this industry, and with the first machine invented for the printing of wallpaper in 1785, their prowess for the making and creation of scenes and depictions on wallpaper grew.
The elite Paris crowd that could afford such luxury bought their expensive paper from one of the most famous manufacturers, Jean-Baptiste Reveillon.
He produced lavish luxury for his patrons, and many of his patterns are great examples of historic wallpaper, even today.
In fact, the factories were symbols of wealth and the inequity of distribution, and the wallpaper factories of France were some of the first targets of the uprise in the French Revolution.
In England, Queen Anne imposed a 1712 property tax on wallpaper, which remained intact for 124 years.
In 1806, forging wallpaper stamps was punishable by death in England. English manufacturers weren’t as popular as the decadent French, and the English envied the French Gothic, Rococo and Revival designs, as well as the panoramic and landscape scenes.
The tax was eventually repealed, and coupled with the introduction of mass production techniques, England and Victorian wallpaper took center stage as a major decorative element in the home.
New technologies allowed for cheaper options to the often costly industry that once hampered every household being able to obtain this highly sought decorative item for the walls.
Themes such as flora and fauna, birds, and nature, as well as exotic prints from wild lands that were now being traveled due to the steam engine all brought nuances to the industry.
In America, before the Revolutionary War with the English, hand painted English wallpaper was found in many important historic American homes.
English wallpaper was often used as well, due to the popular flocking model, a style and rendition of subtle painting techniques that gave a filler effect.
After the Revolution, French wallpaper, thanks to the masterful creations of Reveillon, came into vogue.
Many early themes were used in a repeated pattern, especially in hallways, with the utilization of floral themes, as well as architectural elements.
The Chinese imported, hand painted wallpaper was also a popular option for a richer consumer.
The Victorians also influenced American design, and by the 1920s hundreds of millions of rolls of factory-produced wallpaper were being sold in the states, a sign of style and decor being copied from overseas.
This era was known as “The Golden Age of Wallpaper.”
Apparently wallpaper is making a comeback, as fashion cycles in and out of homes, from early days of Chinese rice paper, to the hallowed halls of the French elite, to Victorian homes with hearths blazing near bramble roses, wallpaper ads a touch of elegance, nature, panoramic views, and even historical scenes.
Next time you enter a room with wallpaper, notice the nuances and delicate intricacies of the art, and remember the early days of wood block prints, hand-rendered European masterpieces, and the magic of turning a room into a work of art.

Looking at the history of the winter white sale