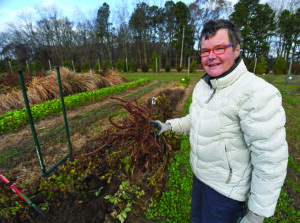 Most vegetable gardens are dormant this time of year but Henriette den Ouden, University of Maryland Eastern Shore Specialty Herb Consultant, is harvesting a new plant in her test plot, red sage.
“It’s neat,” den Ouden said.
She lists the herb’s attractive flower in the summer and its bright red roots for harvesting as its attributes.  “The seeds come from China where it is well-known.
In traditional Chinese medicine, the root from red sage is called ‘Danshen’ and is used for blood circulation and pain related to blood stagnation.
In the United States, it finds a wide variety of uses from support for high blood pressure to relief from pain and insomnia.”
Den Ouden was approached last winter by an herb grower in China who was interested in University of Maryland Extension’s Small Farm Program growing Chinese herbs to test how they would do in soil and weather conditions on Delmarva.
Having it available locally is beneficial, den Ouden said, since transport from China to acquire seeds or plants has been difficult at best, especially since the start of the pandemic.
“They do OK here at the UMES Research and Education Farm, but we really had to improve the drainage of the soil through cover cropping and compost use,” den Ouden said as she pointed to two rows where she planted the Chinese herbs.
Red sage is a perennial plant in the Salvia family (Salvia miltiorrhiza).  Den Ouden planted the seeds in deep seeding pots in the greenhouse in early March and transplanted them in the first row in a section of the herb garden at the farm at the end of April.
She removed the flowers when the time came so “the energy of the plant could focus on root growth instead of seed production.”
She also planted another test area later in the season and will keep them through the winter to see what impact that makes on the growth and yield.
Once the plant is up and the red roots of the sage are visible, she said, you clean them off, cut them into one-inch pieces and dry them for a powder that can be put in a tincture (a concentrated herbal extract) or in capsules.  She doesn’t suggest tea.
Along with red sage, den Ouden planted other herbs in the test plot.
Baikal Skullcap (Scutellaria baicalensis) produced an attractive purple flower and bright yellow root.
Den Ouden said that did well along with Bupleurum that did best when the weather got cooler.
Polygala, however, didn’t do so well and she suggested scratching it from the list of herbs to be grown in the area.
In the next row, den Ouden had already harvested Achyranthes. All are harvested for the root for medicinal purposes.
If you are interested in growing Chinese herbs, contact den Ouden at hdenouden@umes.edu.
(Editor’s note: Gail Stephens is an agricultural communications and media associate at University of Maryland Eastern Shore, School of Agricultural and Natural Sciences.)

The new year is an open page: You’re the author