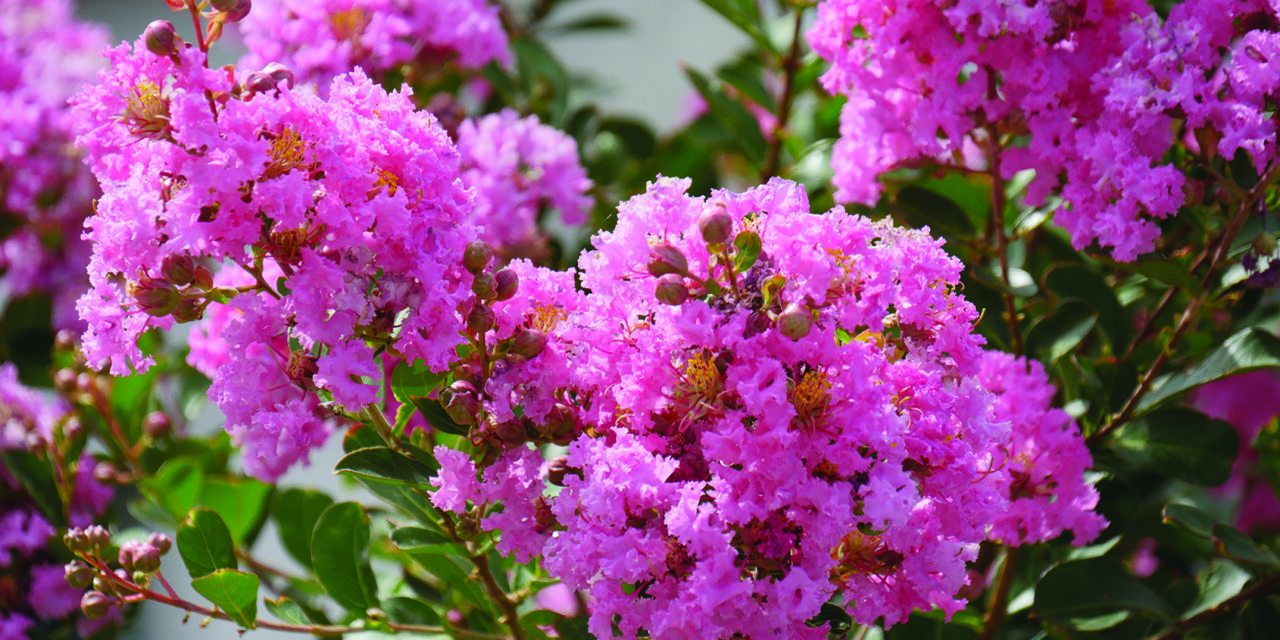 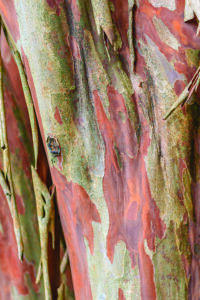 The bark on crape myrtle trees is thin and it can be easily damaged by mechanical injury. Mulch around the plants to prevent this problem.

While they may be native to places in East Asia, crape myrtles have long been ubiquitous with Maryland’s Eastern Shore.
With a plethora of color and height options among its varieties, the tree’s beauty avails itself to a lot of different situations.
They line streets of the Shore’s small towns and they anchor flower beds, create usable shade in small spaces and bring backyards to life with their color and texture.
Crape myrtles are, in general, a trouble-free plant once they are established, but to reach the level of reverence found so frequently in the area, certain steps should be taken.
According to Gene Sumi, Homestead Gardens’ educational coordinator and Certified Professional Horticulturist, most of their growing problems stem from improper planting.
They need at least 6 hours of full sun per day or their growth will be slower and produce fewer leaves.
“Placing the plant in the proper location is critical to its long-term health,” said Tony Murdock, a Master Gardener in Frederick County. “When placing the plant in the landscape, you must consider its ultimate size and spread. You do not want to put it in a spot where it will grow into the house of other plants.
“Crepe myrtles are fairly fast growers that should be placed in a wide-open area that accents their grace and beauty.”
Height can range from three feet in the dwarf varieties to over 20 feet tall, so planting the right variety is just as important as planting in the right place. It can especially help avoid severe pruning, the “crape murder” philosophy chided by most horticulturalists.
According to Keith Mickler, a University of Georgia Cooperative Extension agriculture agent and crape murder fighter, two reasons are generally given for crape murder. One is to keep it from getting too tall, which he said is easily mitigated by selecting the right size plant.  The second is that dead flowers need to be cut off yearly to promote flowering.
“Wrong,” said Mickler. “Observe rarely pruned crape myrtles and you’ll not see them lacking in flowers from year to year.”
While flowers do come on new wood as well, Master Gardener in Louisiana and blogger under the name “The Gardening Diva,” Calla Victoria said the most she does is nip of the ends of branches.
Late winter and early spring is considered the optimal time, before new growth begins.
“When pruning your crape myrtle, only remove branches that are crossing or rubbing against each other, remove suckers (the small branches coming from the base of the tree), take out dead branches as well as any branches that are jotting out and ruining the shape of your tree,” she said.
According to Mickler, committing the sin of crape murder:
• Upsets the tree’s food manufacturing capacity and reserve by severely altering the crown (shoot)-to-root ratio.
• Removes most of the buds that would form a “normal” branch system while stimulating undesirable, upright, largely unbranched watersprouts that actually accelerate a crape myrtle’s growth rate.
• Leaves large branch stub wounds that are slow to callus or close, and are prone to decay.
• Creates hazards because weakly attached sprouts are more prone to break in wind and storms.
Though usually considered easy keepers, crape myrtles are not without their issues.
Powdery mildew is a common problem with crape myrtle. It is most common during spring and fall. Leaves and young shoots are heavily coated with a powdery, white mold, and may become distorted. Flower buds may not open.
Locating the plant in full sun and providing good air circulation helps prevent powdery mildew, but the best approach is to choose resistant varieties.
Fungal leaf spots caused by Cercospora lythracearum may appear on crape myrtle foliage during periods of warm, moist weather. This disease can result in almost complete defoliation of susceptible crape myrtle cultivars during late summer.
Sooty mold is a black coating on leaves that results from a fungus growing on honeydew excretions made primarily by aphids. Plant vigor may be decreased because of the reduction of photosynthesis in the leaves due to shading.
The bark is thin and can be easily damaged by mechanical injury. Mulch around plants to prevent this problem.
Vigorous, shallow roots may create problems for healthy growth of underlying plants. Use sturdy ground covers or shrubs to underplant.
Sumi said customers have worriedly brought him dropped leaves from lower branches, concerned a disease has taken over the plant.
“It’s totally normal for the plant to shed some of it’s leaves as new growth shades some of them.
Sumi also said wood chip mulch is a bad idea for around the plant.
The chips can leach nitrogen from the soil and cause extensive leaf drop.
Mulch from tree bark or leaves is a suitable option, he said.

Knock the dust off your garden