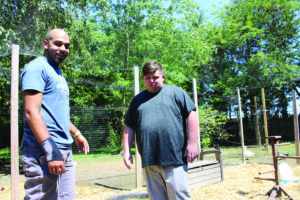 C.J. Phippin, left, and husband Chris Phippin, check on the chickens, turkeys and other birds on their property. Wanting to create a refuge space for foster children and their animals, it was coincidental that the property they settled on in Maryland was already named “The Refuge.” (Photo by Sean Clougherty)

As Chris and C.J. Phippin moved around from state to state, their passion for helping foster children always came with them.
After moving to Maryland last fall and settling into a property with more space than they’ve ever had, they want their outreach to expand as well.
After finding a home on two and a half acres near St. Michaels last year, the couple got right to work, clearing out overgrowth, installing a koi pond, starting a vegetable garden and building shelter for their growing number of small animals.
Their goal with the now-named Phippin Farm and Refuge is to use the space where youth in foster care can come, enjoy nature and the animals, and find refuge in each other, an experience they say has been very helpful in raising their own adopted children.
They now have chickens, ducks, turkeys, dogs, cats and a turtle.
“Animals are just extremely beneficial,” Chris said. “In our minds that’s what’s been successful.”
The Phippins have provided foster care to 30 children, including five in Maryland.
They’ve chosen to focus on helping children with “extreme backgrounds,” Chris said, those recovering from abuse and severe neglect.
“We do that because we want to give them a chance at life,” he said.
C.J. said four months into helping their first foster child, they noticed changes in the child’s behavior and demeanor when interacting with their dog Princess.
“Princess just took to these children,” C.J. said. “She instantly wants to see what’s wrong.”
They said they witnessed the children become more comfortable and adjust to their surroundings better.
It helped them communicate more.
“All of these kids have been hurt by humans,” Chris said. “In their minds, animals are who they can connect with.”
That motivated them to maximize what space they had at the time with more pets.
While living in Tennessee, they made a connection with a teacher who had a farm with animals and used the space often for character building and respite.
Raised in Dorchester County, they wanted to be closer to family and brought that mindset with them to Maryland to create their own safe haven.
Coincidentally, what they found was already named The Refuge.
With six children at home now age 11 to 6 months, they said there’s always a lot going on.
“We have a zoo both inside and out,” C.J. said.
But they said they want other children to be able to have the experience, so their plan includes doing what is needed to have other foster parents bring children, and meet with case managers, psychologists and other care providers at their propert.
“We want this place to be a safe haven, a place to get away,” Chris said. “With us, expanding and doing other things, the sky’s the limit on the amount of children we are going to help.”

Explore next generation of cooking 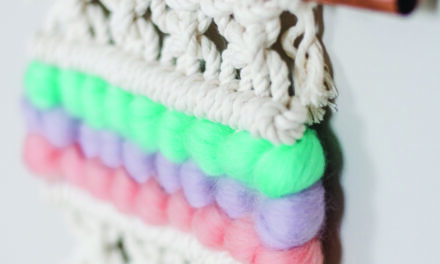 Macramé returns as a groovy way to keep hands busy