Charlene Rhodes almost didn’t put up her display of lighted houses and model trains this year but once word got out, family and friends that enjoy it each year had other ideas.
“One of my nieces said, ‘Well, what are we going to look at?” Rhodes said, gazing over the dozens of miniature buildings set up on white-felted tables in her Queen Anne’s County home’s sun room.
With about 80 buildings in all, Rhodes said she downsized her set up slightly this year and some of the buildings stayed in storage.
The houses and trains go up after Halloween, and stay up through the Christmas season.
“If I’m steady at it I can get it up in three days,” she said.
She said she gets help setting up the tables each year but then family clears out and let’s her go to work, creating a different scene each year.
Some years, her nephew, now 8, helps in the setup and “if he’s here, he’s very much into the details.”
With more than 40 family members coming over for Thanksgiving, Rhodes said the display has become a main attraction for visitors.
“It’s like a big deal now to come over and see what’s different because it’s never the same year to year,” she said.
The collection of Department 56 buildings goes back to 1982 with the first one, a hospital, given to her from her mother.
Over the years, family has helped build the collection with more gifts and she’s searched out particular buildings she wants in the village.
Model trains are featured as well, some years three or four running amongst the houses and businesses.
One train, a H-29 Scale, holds special meaning.
It came from her father, who bought it when Rhodes was 3 weeks old.
Rhodes said the track came to her when her first son was born, more than 30 years ago, and has stayed working.
Her parents put up similar displays when she was growing up, putting everything up in one night on Christmas Eve.
The houses were cardboard with cellophane windows, then. They’ve deteriorated through the years, but the memories are still strong.
Though the display appeared to be in doubt this year, Rhodes said she’s already decided about next year.
“I’ll put it up,” she said with a smile. “You can’t disappoint the kids.” 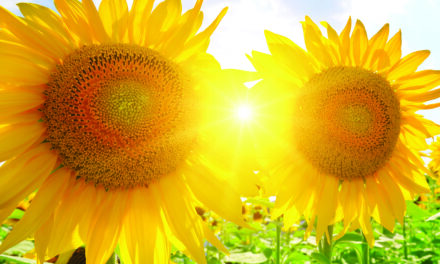 Sunflowers are a beauty everyone enjoys