Use bats to get rid of mosquitoes 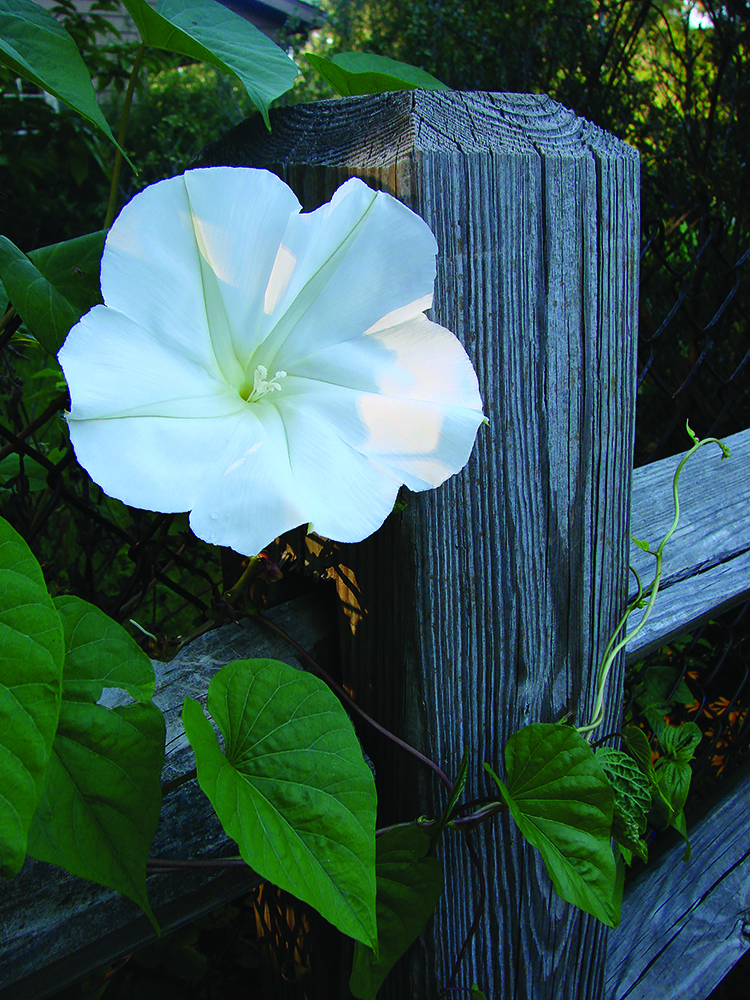 Nocturnal blooming moonflower attracts moths and other night-flying insects that in turn attract bats to feed on the insects. (Photo courtesy Karen Dorsett)

In the spring and summer, as daylight fades and dusk sets in, bats flit and flutter in the evening sky.
They are mysterious creatures, revered by some and feared by others. The truth is, they are a fragile yet integral part of our ecosystem and desperately need our help.
According to Bat Conservation International, based in Washington D.C., bats live on every continent except for Antarctica. There are over 1,400 species of bats, and more species are discovered every year. Unfortunately, bat populations worldwide are in decline. Habitat loss, wind turbines, and White Nose Syndrome have caused their numbers to plummet and placed many species on the brink of extinction.
Bats live peacefully in forests, caves and abandoned mine shafts.
When those habitats and roosting areas are disturbed by irresponsible tourists or cleared out for development, bats’ lives become endangered. This is particularly deadly in the winter months. If they are awakened from hibernation, they can burn through their fat stores and die of starvation, unable to feed on the insects they thrive on during the warm months of spring and summer.
Wind turbines, while a popular form of renewable energy, can pose a threat to migrating colonies of bats. Contrary to popular belief, a bat’s vision is pretty equivalent to a human’s. They use their radar and ultrasonic abilities to look for water and food. This does not aid them in avoiding the whirling blades of a wind turbine.
White Nose Syndrome was brought to the United States by a caver returning from a trip to Europe. In 2010, that individual went caving in New York City with their contaminated equipment and transmitted the fungus to an entire hibernaculum of bats.
White Nose Syndrome attacks hibernating bats, eating away at their tissues while they sleep. Their wings, which are important for water storage, are the first part of their body to be destroyed. Dehydrated, the bats come out of hibernation too early, and they die of dehydration and starvation. White Nose Syndrome has killed approximately one-third of the bat population on the East Coast alone.
Bats are most definitely present on the Eastern Shore, and about 10 species of bats can be found throughout the state of Maryland. Easton resident Devin Herlihy has studied bats extensively in both North and South America, from the migration of bats over Lake Erie to the behavior of frog-eating bats in Panama. She has worked with Case Western Reserve University, the University of Akron, Clemson University, the Smithsonian Institution, and the Delaware Division of Fish and Wildlife. Herlihy is on a mission to combat the stigma that surrounds bats and encourages everyone to consider what bats do for our environment.
“Bats like to eat beetles, moths, stink bugs and gypsy moths, and can eat about 1,000 mosquitoes in one hour,” Herlihy said. This makes them a valuable source of natural pest control for homeowners and farmers. The playful chittering sounds they make is how they communicate where to find food and how to avoid danger.
While some bat colonies can be quite large (Bracken Cave in Texas has over 15 million bats!) most around here are about 30 at the most. These bats roost in beech trees or forest litter, but one or two bats may occasionally find their way into outbuildings or attics. They hibernate from October/November until March/April, and give birth from May to July.
“Bats have the same repopulation rate as elephants, since they only have one pup per year, but they aren’t as charismatic so people aren’t as concerned,” Herlihy joked.
To help support the repopulation of these curious little critters, there are a few steps property owners can take. Planting and maintaining forested areas, providing sources of clean, calm water like ponds, and incorporating nocturnally blooming flowers with white or purple blooms like moonflower, night phlox and Casa Blanca lily, to lure in moths for bats to snack on are all helpful.
Bat houses are simple to build and install and can be a great summer project for families to complete together. There are several free plans on the Maryland Department of Natural Resources website, ranging in size and function. You can also purchase kits or assembled houses from local feed stores or online.
Herlihy stressed that while bat houses “can attract bats and keep them where you want them, don’t be discouraged if they take several years to use the bat house. Our main issue is population loss, not habitat loss.”
If you ever find that you have bats living in your attic, Herlihy said it’s best to contact a wildlife relocation specialist. They have the expertise and equipment to remove dried guano and install one-way exit chutes in the gable vents at the appropriate time of year, which will enable the bats to leave safely and avoid having any pups be separated from their mothers. If it’s an urgent scenario, protective gloves and a towel or blanket can help you safely capture a rogue bat that has likely found its way into your sink in an attempt to find water. Try to release these bats near a tree, since they cannot take flight from the ground, Herlihy said.

Bark worth its bite