It’s that time of year again when bulbs are sprouting up beautiful flowers in nature, including crocus, daffodils, hyacinth and tulips.
Many people want to preserve this beauty in nature, in artificial form, to admire it indoors, and bring a bit of nature to their dwellings. 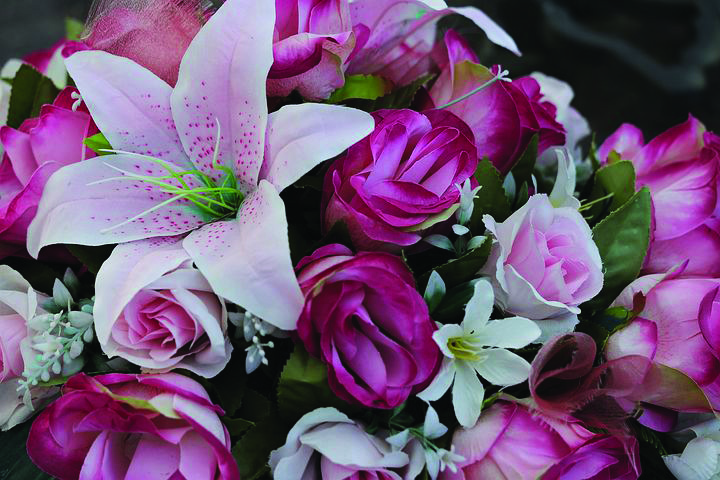 What is the history of the artificial flower, and how did we learn to mimic nature and adore it for longevity?
The ancient Egyptians were some of the earliest artisans of artificial flower arrangements.
They would make large wreaths that were dyed linen or actually horn pieces, thin slices of the bone that were then dyed to mimic flowers of the region. Some of these creations also consisted of gilt, bronze or silvered leaves, arranged in the same wreath pattern.
The Romans were famous for their artificial wax wreaths and flowers.
It is said their fake wax flowers were so delicate and so perfect that their skills in this arena have never been duplicated, even in modern times.
Wax is a very moldable substance, and lends itself to intricate creations.
The Victorians in Britain also were able to perfect wax techniques in artificial arrangements, creating many intricate inventions in the floral world with the aid of wax.
The Chinese invented silk, thanks to the help of the silk worm, and were also the first people to make silk artificial floral arrangements.
In the beginning of the process, it was a very costly endeavor to make such creations, as silk was very expensive and hard to work with as a craft.
Only the very wealthy, such as palace royalty were allowed to have silk arrangements, but as trade expanded, and the craft was more refined, the silk flower was available to more people.
In Europe, the Italians were the first to make silk artificial flowers, using silk cocoons, followed by the French, whose artistry and skill overshadowed anyone else in Europe, eventually being in such demand, that they were sending their creations to America as an export.
They also shared their delicate creations with England, who, during the Victorian times and beyond, loved artificial arrangements of all kinds in their homes.
European artisans also utilized glass, soap, clay and other natural materials to mimic flowers, with the Americans also trying their hands at different materials for floral creation.
In all of these early processes, many experiments were tried. The English, who invented paraffin wax coated flowers, utilized many techniques to try realism with the paraffin.
The Japanese attempted to use ribbons, twisted in flower form, to create floral significance, and the Chinese were still trying to use many types of different materials to create the flora they desired.
Some producers around the world utilized feathers from all sorts of species of birds to produce brilliant colors and styles. Some attempts at realism failed, and a crude resemblance of a flower was produced, while some had more realism, like the French and the Chinese, using various materials to mimic nature and natural settings indoors.
In the 20th century, with the inventions of artificial substances, such as polyester, plastic and other chemical materials, the faux floral industry began to thrive, and still does to this day.
With molds, machine made products and quick artistic touches, artificial flowers can be very realistic and hard to distinguish from the real, natural cousins of the outdoors.
China wears the current crown of artificial flower production, with thousands of artificial flower and plant factories, producing 40,000 containers of the product that circle the globe.
Flora and fauna have natural beauty that we want to preserve and admire for eternity, frozen in time at the first bloom.
For eons, the people of this planet, throughout history, all over the world, in many regions and biomes, have tried to duplicate and relish nature’s creation, some with fantastic results, and some with a general example of what a flower or plant should look like.
The artificial plant and flower industry continues on to this day, and will forever showcase talent and admiration of our natural world.
(Editor’s note: DeeDee Wood is the owner of Black Cat Curiosities, an online antiques research and sales venue.)