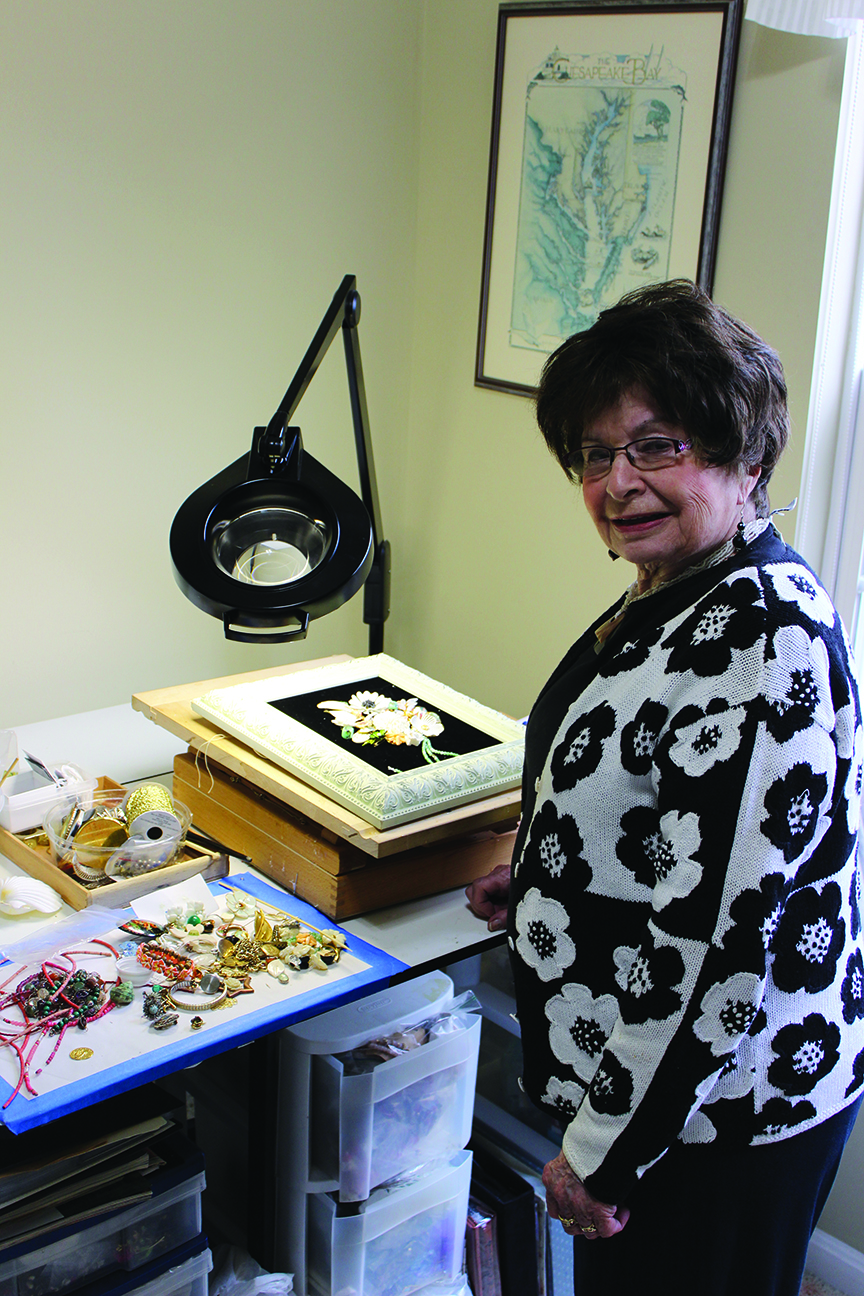 Nancy Jarvis said she has always enjoyed creating, whether the media is silk flowers, seashells or jewelry. (Photo by Sean Clougherty)

Some 40 years ago, Nancy Jarvis opened her front door to find a large unlabeled box she wasn’t expecting.
Upon opening it, she found it full of artificial flowers and it fueled her craftiness and creativity.
“I just went crazy,” she said. “I started making wreaths and anything I could.”
From that box came a series of flower show contest entries, home décor pieces and gifts Jarvis shared with loved ones.
“It just inspired me, you have no idea. Flowers everywhere.”
In retirement, Jarvis moved to Ocean Pines and was smitten with the coastal themes and kept the creativity going.
“All of a sudden there was a new media — seashells,” she said.
Jarvis got busy decorating mirrors, wreaths, candlesticks and just about anything else that appealed to her, intricately covering them in shells.
Still crafty and creative, Jarvis now channels that adventurous spirit into two- and three- dimensional collage, specifically with jewelry.
Jarvis said she saw the technique on a trip to West Virginia where a store featured a framed Christmas tree made out of jewelry pieces, revealing to her another new template to explore.
“I wanted to see if I could do something with it. It’s been lots of fun,” she said.
With suede cloth or tapestry material as a backing, Jarvis spends days, sometimes weeks, arranging and rearranging jewelry items until it’s just right.
“I redo, then I add to them and take away,” she said.
On the framed board, earrings can become flowers, a bracelet may turn into a flower stem or bird’s feather, pendants turn into tree branches and necklaces swirl as if leaves in a breeze.
“It’s not flat,” she said. “It makes it more alive.”
When Jarvis is pleased with the creation, it’s time to glue it all down in place.
“It’s a challenge,” she said. “I want to do something that’s beautiful and if it’s not beautiful I’m not going to put it out.”
She sells her work, but caught up mostly in creating, Jarvis has put less time into showing them. Prior to the pandemic, her work has been featured in shows at the local Ocean Pines Library, events at the nearby Convention Center, but she freely admits that making the items is her passion.
“Hardly ever do I get bored. I’d rather do this than most anything, actually. I just love creating stuff,” she said. “Sometimes it wakes me up at night. Then of course I can’t hardly wait to get out of bed so I can start in.”
Jarvis said she welcomes opportunities to give private showings as well and can be reached at nancy.jarvis@yahoo.com.
A lesser, but significant aspect of her work is creating collages or people using jewelry they inherited from a loved one as way to remember the person they’ve lost.
She noted recently she turned a mother’s jewelry collection into pictures for her five daughters.
“It can still be passed on that way,” Jarvis said.
Since her work with jewelry began, Jarvis has been building an inventory of vintage and quality items that could one day make it to a finished piece.
She said she rarely misses a chance to stop in an antique mall and is always on the lookout for a piece of magic.
“Sometimes you get a piece of jewelry that inspires you to make this picture,” she said. “Sometimes it’s the frame that inspires you.”
And, sometimes, instead of going on the hunt, she said that inspiration finds her.
Similar to that mysterious box of silk flowers showing up decades ago, Jarvis said as more people learned of her craft, more jewelry would appear.
“Occasionally, that will happen, and I’ll find a box at my door.”

Tilghman Islanders have pick of crop