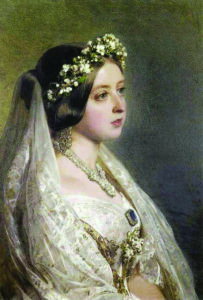 The white wedding dress concept wasn’t really used until 1840 when England’s Queen Victoria’s wedding day, and the proper white dress example made it into fashion magazines around the world.

June is the traditional month for weddings, and the ultimate symbol and one of the primary focuses for the big day is the wedding dress.
Wedding dresses have a long history that includes representing family honor, color choices and symbolism, fashion and style periods and even a little superstition.
Weddings and unions of people all over the planet is a story as old as the human race.
Many ancient cultures and examples in history show the dressings and garments of clothing at specific times represent specific culture lexicons and societal values.
From ancient cultures in Babylon and Syria to Egypt and beyond, ritual, dress and garments were always a part of ceremonial unions and the joining of houses.
Renaissance times, during medieval romantic times, saw brides marrying their knights in dark, luxurious colors of deep burgundies and violets, gold brocades and fanciful details, or at least it is what we are led to believe in the decadent oil and tempera paintings of old masters of the times.
Wedding dresses have not always been an essential garment made and worn for the specific requirement of a union.
The rule of thumb was to pick the best garment owned for the special occasion.
As weddings were once a joining of families for specific purposes, whether it be for power, land, convenience or planned marriages — sometimes rich, luxury fabrics such as silk or detailed hand work were used to convey wealth and powerful influence.
Colors of wedding dresses have always played a part in the wedding dress mystique.
White is typically associated with being pure, but the white wedding dress concept wasn’t really used until, in 1840, England’s young Queen Victoria married her cousin, Prince Albert, and the proper white wedding dress example made it into fashion magazines all over the world.
The notion of using this color has been popular ever since the young Queen donned the color.
Other colors that were popular were dark blue, worn to represent the Virgin Mary from Gothic paintings, darker colors that seemed regal and demur, and had an added bonus that a dark fabric would hide stains on pre-worn garments.
Green was the only color that wasn’t worn, as it was considered unlucky in many cultures before the 1800s.
Queen Victoria’s dress also inspired something else-the use of a lot of material and fabric to flaunt and state your level of wealth.
The more fabric and detail used, the more status you obtained.
During this time period, as well, the Industrial Revolution was in full swing, and dresses were easier to make with a machine, and could be more elaborate.
White was a hard color to preserve and keep clean during the dirty time of industry, with soot from chimneys and dirty, dusty roads and filth in the air from cities.
Only rich women could afford a true, bright white dress, thus propagating the mystique of wealth and influence through the symbol of their union.
In Eastern cultures, such as China and India, brides often wore and still wear red, which symbolizes good luck and auspiciousness.
In Japan, brides wore multiple dresses during their weddings with a variety of colors. In Africa, a tradition and history in some ancient colors added trade beads and jewelry to clothing to embellish and represent tribal personifications.
Wedding dresses were all sorts of materials and fabrics, depending on what part of the world you lived, from silk, nylon, cotton, animal hide or even stranger things.
On an interesting side note, in the 1940s, during World War II, brides would make wedding dresses out of parachutes that had saved their sweethearts in battle. It was not only economical to reuse the nylon material to repurpose and save for war, drives but it was also a nod to honor their heroes of war and courage.
Wedding dresses come in many styles, colors, fabrics, hemlines and detail. Many decisions have always had to be made for details such as sleeves, amount of material, lines, frames, and amounts of embellishment.
Stars and royalty in modern times influenced brides to be, such as Queen Elizabeth II, Grace Kelly and Princess Diana.
Fashion magazines made good money reporting on the gossip of who wore what to a wedding.
In modern times, wedding dresses are a very important part of any union of love, but the garment’s roots are entrenched in the human need to represent culture, ideals, regions and necessity.
We look to fashion, role models and conveying a certain message, and this story and ideal is as old as time and celebration.
(Editor’s note: DeeDee Wood is the owner of Black Cat Curiosities, an online antiques research and sales venue.)