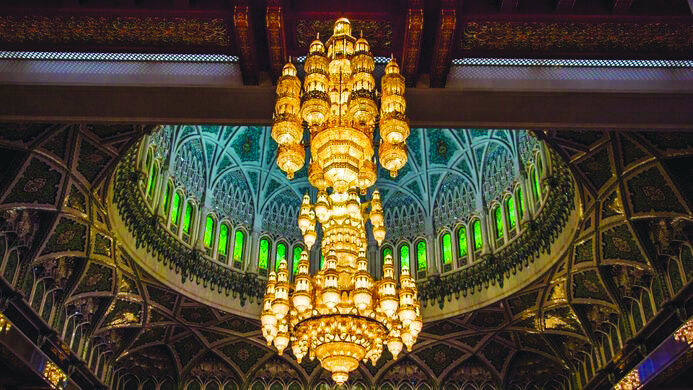 Chandeliers have always made a room significant, with sparkling crystals and dazzling light displays that illuminate the night.
They can also be quite grand and important in the antique and antiquities world, not only for their crystal and priceless components, but also for their size and grandeur.
The largest chandelier in the world is the size of a small house, a masterpiece of staggering proportions, it was built as a compliment to a place of worship.
The Sultan Qaboos Grand Mosque, located in Oman, (near Saudi Arabia and Yemen), has the capacity to serve 20,000 worshipers at one time. Above them, in the men’s prayer hall, is the world’s largest chandelier, sparkling and catching the light, looming over them at a weight of more than nine tons.
Chandeliers have a rich history in the decoration and design world. Some of the world’s first chandeliers were comprised of rock crystal in Europe in the 1600s, advanced by the invention of flint glass, and made grand by the glass kilns of Murano glass in Italy. French nobility during the time of Marie Antoinette hungered for the illuminated wonder, and with the invention of Daniel Swarovski’s crystal cutting machine during the Industrial Revolution, chandeliers became a staple of impressive room décor in an tasteful, opulent environment.
Sultan Qaboos, in celebration of his 30 year reign in Oman, announced a competition in 1992 to design the world’s largest chandelier for the newly created mosque. The plan that was chosen took several years to build, and the enormous and fanciful plan was finally brought to fruition.
The staggering facts about the world’s grandest, largest chandelier are unbelievable. The lighting marvel is 45 feet tall, 26 feet wide, contains 1122 halogens lamps, 36 electrical circuits, and the most important part, of course, are the Swarovski crystals, which are 600,000 in number, complimented with real gold trimming and cleaned periodically to catch the light.
The chandelier has fine gold-plated, detailed work upon the surface as well, and is designed with a particular, characteristic minaret, a large, circular central structure design. The large center minaret is accompanied by 24 smaller minarets, which forms the characteristic shape of the lighting design in this massive structure.
The concept of design for the chandelier is purposeful. A minaret is very symbolic in Islamic religion. In religious architecture of the Islamic faith, a minaret is a tower from which worshipers are called to prayer by a muezzin, or crier. The light was designed as a symbolic minaret above the prayer hall.
There is a rather complicated, sophisticated relay of electrical and system workings within the massive light. For maintenance purposes, there has been a staircase inserted inside the light to perform routine maintenance and to change the bulbs that illuminate the light. Due to the huge electrical use that the light requires, recent features include a dimming feature that can save on energy bills in the mosque.
Lighting in a room is a subtle element that is, often times, added as the last concept of a design.
Chandeliers have always added a statement to a room, grand parlor, or a place of worship. Subtle nuances of light and shadow can effect the mood, tone and grandeur representation in a space.
History shows us that chandelier design has changed with the ebb and flow of available materials and manufacturing processes, but the initial concepts, opulence and design, are always present with these purposefully designed elements of light.
(Editor’s note: DeeDee Wood is the owner of Black Cat Curiosities, an online antiques research and sales venue.)