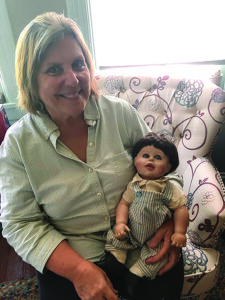 Sea captain portraits, strange dolls share residence with Mindie Burgoyne in a Queen Anne Victorian house in the lower Eastern Shore that brings uncomfortable feelings, restless sleep and dreams, and general knowledge that there may be ghosts. (Photo by DeeDee Wood)

Chesapeake Ghosts is an unusual tourist industry business on the Eastern Shore.
When you take a tour with this company, you walk around old towns and hear tales of yesteryear, folk tales, and ghosts!
The owner, Mindie Burgoyne, who has been running this unique business since 2013, lives in a reportedly haunted house in Somerset County.
Inside this house, I had a chance to sit down with her and hear stories about objects and antiques that she has acquired through the years — some family heirlooms — that seem to have stories of their own, perhaps their own haunted tales.
Mindie has a doll that people ask her to remove from the room, or feel generally uncomfortable around when it is sitting near them.
Burgoyne admired this doll years ago in a store in Howard County, and later, unbeknownst to her, her husband went back and bought it for her as a gift, because she said it looked exactly like her son at 10 years old.
Sporting short brown hair and big blue eyes, the doll wears a little sailor outfit and sits, looking very human-like in expression and trait.
“The doll has a sailor hat, and I swear I can’t ever seem to keep track of it,” Burgoyne said. “I find it all over the house, in different spots, and in fact, it is missing right now.”
At the time of the writing of this article, her large Queen Anne Victorian was for sale, and the doll spends many a day locked inside the upstairs closet, as to not disturb potential buyers of the house.
While walking around her house, asking about potential objects, I spotted a jug with a face, placed behind glass for viewing in a curio cabinet.
“That’s my grandmother’s Toby Jug. My mother gave it to me, and I keep it in there. I have always been disturbed by the face,” she explained.
The jug sits, eyes and mouth, pertly staring out at the gazer, amid other collections and objects on display.
Automatophobia is the fear of humanoid objects, such as faces, visual visage-related creations that we associate with faces, and thus emotion.
It can tend to lend a hand in the disturbance of the assumption an object has emotion, just as a real face or humanoid component to something can do.
As well, pediophobia is the fear of dolls, and a very real one in the realm of haunted antiques. Many haunted tales of antiquity involve some type of haunted doll, the accompanying child and/or a toy.
In this same vein, there is a large, doe-eyed child depicted in a painting, hanging tastefully in her Victorian dining room.
The face is large, and young.
“That’s me,” Mindie states matter-of-factly. “It was a painting of me as a young child. It used to be put in the closet because my mother felt like the eyes looked at you when you walked in a room or were sitting around it.”
Indeed, the eyes did seem to peer right through us as we stood, considering it.
I was taken upstairs in the mansion. A statue of Rose of Lima, donned in her black robe and crown of thorns, was taken out with a small box.
Burgoyne sat back in a chair in her library and told me the most ghostly tale of the day.
This statue had a first degree relic of Rose of Lima herself, given to her by a friend years prior. The box contained a small chip of the saint, encased in a clear glass shelter.
“My daughter would spend the night with this statue and relic in the room,” Burgoyne said. “She told me one night that the statue came alive in her dreams and tried to speak to her, to tell her things.
“She said she wouldn’t listen, and was paralyzed by fear. I had to move the statue out of the room into a different spot.”
Last but not least, there is the “Sea Captain” room of the house. I hesitated before entering the room because I had been told there was a vortex to other worlds outside the room, in the hallway.
Inside the room, two strange portraits of sea captains hang on the wall, their eyes peering back at you, almost in a scrutinizing fashion.
Burgoyne stated she bought her first sea captain in Cape Cod, then kept adding them when she found them in stores and at sales.
No one likes to sleep in this room, she stated, and that people had restless nights, fits of unrest, and ultimately felt uneasy enough to want to leave this room, unable to be comfortable enough to spend the night in the dark back bedroom with sea captains looking down on you as you slumber.
All in all, the Queen Anne Victorian, owned by a woman who runs a ghost tour company, is what you would expect.
Sea captain portraits and strange dolls that bring uncomfortable feelings, restless sleep and dreams, and general knowledge that there could be ghosts, is enough to make the strongest skeptic look twice around old dark corners, peer into the eyes of old oil paintings, and wonder what the sound down the hall might be in three in the morning, only to find a tiny sailor hat outside your door.
Mindie Burgoyne is the owner of Chesapeake Ghosts, with 11 walking tours and five bus tours, featuring cemetery walks coming in the fall, as well as paranormal investigations and storytelling sessions.
Burgoyne can be reached at www.chesapeakeghosts.com or by calling the ghost phone at 443-735-0771 for tour times and schedules.

Linchester Mill in Preston is a must-visit