July is a patriotic month, and it’s a good time to discuss one of the most iconic figures in United States history, that of Uncle Sam.
He adorns old advertising banks, posters for war, paintings, and there are even vintage dolls of him.
Who was “Uncle Sam” and why is he so prevalent in our culture as Americans, even today? 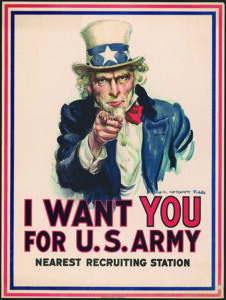 Most historians believe “Uncle Sam” origins start with a merchant in New York named Sam Wilson, who supplied beef to the troops during the War of 1812.
The barrels in which he used to transport the meat to the troops were stamped “U.S.”, and it became a joke to him and his family because they called him Uncle Sam.
The troops caught on to the fact “U.S.” was actually Uncle Sam’s meat they were eating, and the nickname “Uncle Sam” was forever synonymous with Sam Wilson.
Uncle Sam symbolism is also based off of a joke name the British called U.S. troops during the Revolutionary and 1812 wars, which was “Yankee Doodle.”
The character depicted a thin man in red, white and blue with a long beard, so some believe our current Uncle Sam symbolism is a combination of early Yankee Doodle and Sam Wilson’s story combined to create this enduring, patriotic character.
One of the items in the antiques world that is collected with Uncle Sam’s characterization is the military recruitment poster.
Uncle Sam had become a global symbol of freedom by 1900.
An artist, James Flagg, created a strong figural character of Uncle Sam in paintings and renderings for posters that were printed in the millions for both world wars.
Using this symbol in such widespread, iconic advertising and recruitment helped cement the symbol of Uncle Sam and America, representing freedom and democracy.
Uncle Sam symbolism can be found in antique stores and on online auction sites as well.
Some prime examples for collectors would be old coin banks with Uncle Sam “protecting” their money, war posters, especially from World War I and II, old postcards, costumes people wore for parades of his hat and coat, and other Fourth of July advertisements and products.
Symbolism is always important for a particular cause, and antiques are full of symbolism, especially historic, patriotic themes.