Applying forceps with finesse is the best way to remove a tick , disease-free.

It was one of those warm June mornings made for spending time in the garden, and I had been looking forward to it.
After weeding and watering my veggie patch, I washed up before heading to work, happy for a bit of time bathed by warm sun and fresh air.
Later that night, more than ready to call it a busy day, I stopped to inspect what looked like a pimple on my inner thigh.
Dismay became alarm as I realized the spot was, in fact, an embedded tick.
My dog-tired brain scrambled to remember what I was supposed to do now, somehow managing to initiate a frantic but fruitless search for tweezers.
Desperate, I decided to try a small nail cuticle scissors — the flattened ends of the slim shears did the job, slipping the tick from its feeding spot.
Momentarily relieved, I prodded a Google search to learn what my next course of action should be.
Good old soap and warm water plus rubbing alcohol applied to the bite site right away were all that was required, but just to be safe, I repeated the application several times.
I felt comforted seeing that the red itchy bite site got no bigger and developed no bulls eye rash over the next few days. My lingering apprehension lifted, but as it turned out, not for long.
The next time I worked in the garden, I took what I deemed sensible precautions, wearing long pants and long buttoned sleeves, spraying my skin with an over-the-counter insect repellant, and showering after.
That night though, another tick was enjoying a late night snack at my expense, and perhaps exposing me to untold danger.
This time, unable to reach the area with scissors, I doused the site with alcohol, hoping to “drown” it out of its feeding spot; it worked.
Again, I flushed the dreaded tick away while continuing to dab at the red bite spot with alcohol, adding hydrogen peroxide as overkill insurance.
But over the next few days my worst fears seemed to be coming true: I felt chills, fatigue, and aches, coupled with enough anxiety to make a beeline for the nearest after-hours care facility the minute my work day ended.
The little I knew of Lyme Disease included how crucial it was to act sooner than later. The practitioner agreed, and, after drawing blood, prescribed Doxycycline, the standard recommended treatment.
For the next 21 days I faithfully swallowed two doses of pills, hibernating indoors to prevent the sun sensitivity which is a side effect of the meds and reading up on what further precautions to take the next time.
I may have been living under a rock all these years, but I’d never heard about the ultra-effective tick repellant permethrin.
According to the University of Rhode Island’s TickEncounter Resource Center, permethrin is synthetic, biodegradable, odor free, and produced from the chrysanthemum flower.
Used to treat clothing in the military since the 1990s, it remains effective through numerous washings, and has been deemed inherently safe for humans and dogs by the Environmental Protection Agency, while doing in ticks, mosquitos and lice on contact.
Spraying one’s footwear monthly during warm weather is highly recommended by the resource center.
Leafing through “Naturally Bug-Free” by herbalist Stephanie L. Tourles, I quickly located recipes for holistic tick repellants for skin and clothing, using geranium, lavender, tea tree, catnip, peppermint, and other oils, some including vodka as the alcohol base.
Returning to the Internet, I found that the instinct to jettison the ticks that had afflicted me, while understandable, was short sighted.
Experts across the board recommend preserving the pesky specimen by disabling it on a piece of tape and securing within a plastic bag in the freezer, readied for sending off to one of several sites around the county, including the Maryland Department of Health, for disease or specimen identification, if needed.
Mainly concerned about Lyme Disease, I was surprised to find out about a host of other commonly transmitted tick borne illnesses including Rocky Mountain Spotted Fever, Anaplasmosis, Babesiosis, Ehrlichiosis, Tularemia, Southern Tick Associated Rash Illness or STARI and even a severe allergic reaction to red meat.
According to the University of Maryland Extension Home and Garden Information Center, five species of ticks are found in the state, and all can transmit disease: The American dog tick (or wood tick), black legged or deer tick, brown dog tick, lone star tick and Gulf Coast tick.
University of Maryland Entomology Professor and Extension Specialist Michael J. Raupp, renowned as “The Bug Guy,” said in his April 18, “Bug of the Week” blog that he’d recently been bitten by a lone star tick, and wanted to help others learn from his lapsed caution.
Raupp recommends invoking the acronym AIR for proactive tick care; the letters stand for Avoid, Inspect, and Remove.
His “avoid” advice starts with keeping to trails, paths and pavement; if in grassy vegetation and wildlife areas, wearing long, light colored pants will help detect “hitchhikers,” and tucking pants legs inside socks for best protection.
Once home, put clothing directly into a hot dryer, not the hamper.
When showering, inspect all nooks and crannies (even the belly button) and ask for help.
If an affixed tick turns up, removal within the first 24 hours can help decrease the odds of disease transmission, so time is of the essence.
But despite old wives’ (or husbands’) tales about applying Vaseline, nail polish, or a lighted match, Raupp, along with the CDC and most other authorities, stress that simply applying forceps with finesse is your best bet to get tick and disease free.

Don’t be a stranger to your garden 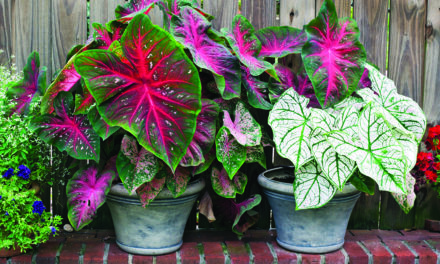