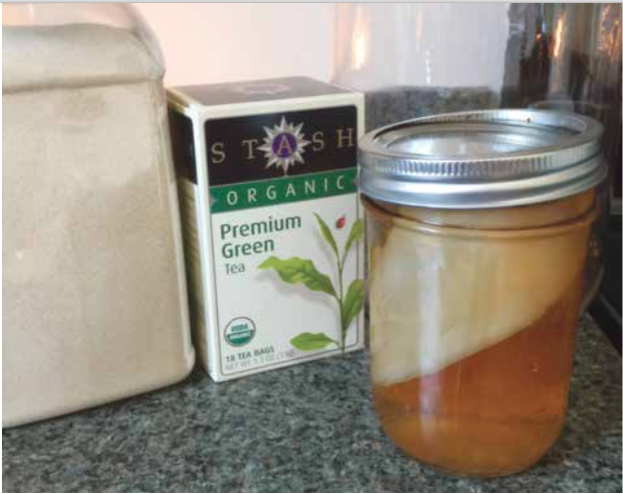 Is the mysterious brew a magical elixir or funky tea?

Kombucha has risen in popularity, although many people still may respond with “…say what now?” when hearing the name. Simply put, kombucha is fermented tea but to its fans it’s so much more.

Kombucha originated in what is now known as Manchuria, in Northeast Asia in 220 B.C., but gets its name from the Korean physician Kombu who prized the drink in the early 400s.

Today multiple flavors of kombucha are sold worldwide in stores and online.

Kombucha is rich in probiotics and good gut bacteria that have been shown to boost overall health and immunity and is also relatively low in sugar and calories.

“Kombucha tea, the 2,000 year old new kid on the block is not only nutritious, but delicious.” says Gayle Gabraith, Certified Holistic Health Coach and graduate of the Manhattan-based Institute for Integrative Nutrition.

“Due to its effect on the human community of microorganisms (humans are 90 percent bacteria) it is important to note that kombucha doesn’t really ‘cure’ anything — it simply brings the body back to a healthy state of balance which is no easy feat considering that everyday most Americans are exposed to toxins and are completely stressed out. Kombucha is quickly becoming one of the most popular sources of probiotics, or healthy bacteria, in America, right behind yogurt.”

So what are these magical benefits that Kombucha can provide? Galbraith cites many:

• Loaded with B vitamins, kombucha is a great natural source of energy

• Contains compounds that may help excrete toxins from the liver, acetic acids and polyphenols to speed up metabolism and aid in weight loss and alkalizes the system, similar to vinegar and lemon juice

• May alleviate headaches and migraines

Galbraith does give a word of advice about introducing new bacteria to the gut: “…no one likes a party crasher – start slowly – maybe 4 ounces a day, and before you know it you will change for the good from the inside out.” 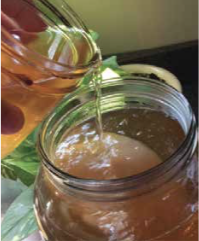 Adding starter tea prior to fermenting kombucha is key. Starter tea is the “home” that your SCOBY floats in.

If you’re the experimental type, making it at home is inexpensive and easy and all you need to start is a SCOBY! “…Say what now?” SCOBY stands for “Symbiotic Culture of Bacteria and Yeast” and in layman’s terms means a “living clump of bacteria and yeast working together in harmony.”

All kombucha starts with a SCOBY, also referred to as the “mother,” and you can find them by contacting kombucha lovers or in stores and online by purchasing a kombucha kit.

Your SCOBY should come swimming in starter tea and resemble a wet pancake. Some people say it looks like a mushroom (although it is not fungi.) You can also buy dehydrated SCOBY from multiple health stores.

To take it a step further you can grow a SCOBY, which requires purchasing a bottle of raw, unflavored kombucha, and time.

For the tea, you can use loose or bagged and 5-8 bags or teaspoons per gallon, per preferred taste. Wash your hands well and/or rinse them in vinegar especially if you are handling the mother directly. In a large pot, bring 3 1/2 quarts or so of water to a boil — boiling for at least 5 minutes will also purify water. Remove from the heat and stir in sugar to dissolve.

Add tea and allow it to steep until your base has cooled. Once cool, transfer the tea base to the glass jar and carefully slide the mother SCOBY into the liquid along with a cup or so starter tea it was living in.

Once this has been done, cover your jar with a breathable cloth and place in an area where it will be undisturbed and not come in contact with sunlight, which can kill the bacteria. In warmer temperatures the kombucha will ferment more quickly and slower in cooler temperatures. The kombucha-knowledgeable Galbraith says the sweet spot for brewing is between 76-78 degrees.

After about a week, start sampling your brew. This is easily done by sticking a straw under the mother and siphoning some out. Once your kombucha has reached a balance of sweet and tartness that is pleasing to you it is ready. Make sure to measure out some starter tea from the finished batch for your SCOBY mother. If you don’t remove the the thin layer at the top of the mother called the baby it will eventually merge with the mother, assuming it is not too thick and healthy. A new baby SCOBY is essentially a forming mother SCOBY. It conforms to the shape of the brewing vessel and protects the kombucha underneath. Remove the SCOBY and strain the kombucha if desired. Some kombucha gurus now take the time to force carbonate and bottle their brew.

When to be wary? Know where your raw kombucha is brewed. If you are pregnant or have a compromised immune system, it is best to choose pasteurized kombucha that is produced where the fermentation process is strictly controlled. You’re dealing with natural, living bacteria that can vary widely in raw brews.

Introduce it slowly, and then make the call.