When shopping for fabric, you might run across a certain type of antique French linen fabric called Toile de Jouy. 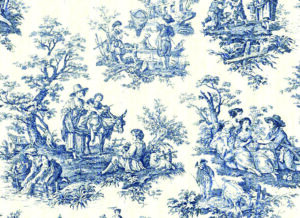 Known for single colored prints on a cream or white background, toile features scenes of pastoral settings, the French countryside, flowers and European tales of old.
There is a rich history to this unmistakably recognizable print, used in textiles and products of many kinds in the decorating and antiques business.
The printed fabric was actually first produced in Irish villages in the 18th century.
The print became very popular in France, and designer Jean-Baptiste Huet and producer Christophe-Philipe Oberkampf opened a factory and produced these early antique textiles in Jouy-en-Josas, France in 1760.
This fact gave the popular linen its name, “Toile de Jouy,” translated as “cloth from the town of Jouy.”
Huet’s legacy is the very familiar single colored print, often red or black, on a white or light linen background, with largely pastoral farm scenes of people or animals, floral prints and more.
Oberkampf was a son of a dye maker, and after Louis XVI lifted a restriction on importation of cotton, his factory began using high quality cotton to produce his new design concept.
The beautiful, striking designs became of phenomenon of sorts, and the French elite saw it as a luxury item.
The cotton cloth was imported, the well made linen was costly, and the elite had first choice at the new items coming out of Oberkampf’s factory. Jouy en Josas was also located near the cities of Paris and Versailles, leading to the success that still shines today.
Oberkampf and his factory, as well as Huet’s designs had no copyright in those days, and other factories in France began to make their own versions of the toile.
Wallpaper became a very popular copy as well, and is still popular today.
When collecting antique toile, look for light colored backgrounds of white or soiled white that turns to cream, as the original toile was impossible to make in more than one printed color.
Light blues and pinks on top of cream linen are usually very old, as the brightness of original French Jouy colors were black, blue and red that have faded over time, thus making lighter versions of the 18th and 19th century antique linens.
Although originally a linen for bedding or drapery, toile is used for many things today, and is quite popular all over the world.
In today’s market, clothing, wallpaper, bedding, upholstery, draperies, rugs, pillows and more can be seen with this identifiable French pattern.
Many people feel that it is still a popular pattern due to the simple, elegant patterns that evoke the farm or pastoral feel of old Europe, simple, duo color schemes and name recognition.
(Editor’s note: DeeDee Wood is the owner of Black Cat Curiosities, an online antiques research and sales venue.)