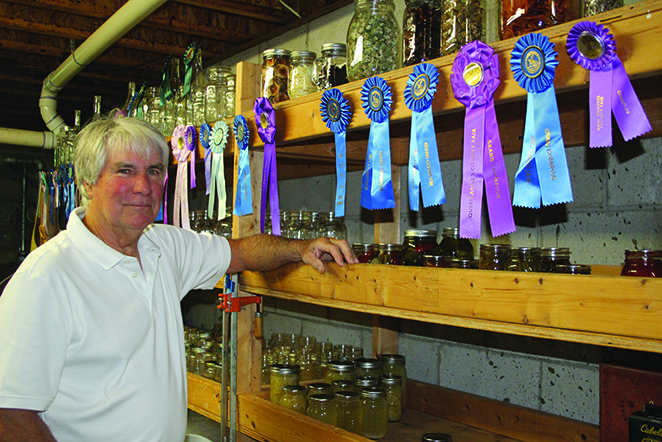 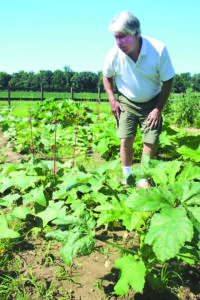 Rick Lankford looks over his vegetable garden for cucumbers ready to harvest. Much of what he grows feeds his penchant for canning and sharing the jars with friends and family. (Photo by Sean Clougherty)

Rick Lankford’s affinity for canning started with an issue a lot of vegetable growers face at one time or another — he had more than he knew what to do with.
The year was 1976 and Lankford, then a new and naïve gardener, planted 36 cucumber plants.
“I was getting boxes of them and I asked my mom, ‘What am I going to do with them?’ She said, ‘Pickle them and give them away as gifts.’”
Lankford listened and has been doing it ever since, trying new recipes, crops and methods along the way.
He said he hands out about 100 jars during the holidays. Gifted jars include, pickles, tomato sauce, jams or something suggested by a friend.
“That’s why I say when I’m canning, I’m going Christmas shopping,” he said. “I always say, ‘If you don’t like it, you can give it to someone you don’t like,’ or something weird like that.”
Along with giving jars away, he also entered some of them at his local Anne Arundel County Fair. Much to his dismay, in his first attempt, all his entries were disqualified for having rusty rings on top of the jars.
“That was the first lesson,” he said. “They get a little meticulous.”
But instead of throwing his hands up to the fair exhibitor experience, Lankford was challenged to learn more, improve his methods and come back again. He learned to focus on having the proper head space between the top of the product and the lid, and maintain good uniformity and consistency with what goes in the jar.
“I said, ‘OK, if you don’t try, you don’t know,’” Lankford said. “It was basically the challenge of it. Every jar is a challenge. It’s ingrained in me I guess.”
After moving to the Eastern Shore about 20 years ago, Lankford expanded his fair circuit, entering his canned goods in the Queen Anne’s and Kent county fairs and the Delaware and Maryland state fairs.
“It just snowballed,” he said. “Then you get into the drying aspect and other methods of food preservation.”
While most of Lankford’s canned goods are done in the hot water bath method, he’s ventured into dehydration — making a popular goose jerky and this year trying dried tomato skins — and lacto-fermentation to make pickles, sauerkraut and other foods.
In some cases, he sees the product from start to finish, starting seeds in a growing chamber in his basement or in his greenhouse, transplanting them to his garden, harvesting, processing and canning them. Cucumbers for pickles and San Marzano tomatoes for sauce fall into this category.
In other cases, he gets fruit from other local growers to fill his jars.
“I try to buy local because, you know, it’s that much better,” he said.
This time of year, Lankford’s canning goes into high gear. The crops are ripe which coincides with the timing to prepare jars for the fair circuit. The premiums he gets for the entries go back into the hobby, buying jars that were gifted and didn’t come back, seeds and all the other necessities of vegetable gardening.
Going to the fairs keeps him in touch with other exhibitors he known for years and in the case of the Maryland State Fair, helps him stay in touch with cousins who live near the Timonium fairgrounds.
“A lot of it is because I meet nice people and I learn a lot,” he said. “It’s a family type of thing.”