When Charles and Debbie Brohawn started Smokey Cat Lavender Farm at their home in Federalsburg, they named it after their grey cat.

Not long afterward, “the cat walked off,” Debbie said.

The venture is really Debbie’s, although Charles gave up his workshop to turn it into a lavender shop, after putting on an addition for his tools.

It wasn’t that Debbie needed anything more to do. She works full- time for the Board of Elections in Caroline County and, as an insurance agent like her husband, she continues to work part-time in the insurance industry.

In part, the lavender farm was conceived of as an “empty nest project” after both kids graduated from high school.

There was a large, sunny area behind their home that was dry and sandy. “Even weeds wouldn’t grow there,” Debbie observed. In 2015, they decided to plant lavender there. Lavender, a perennial in the mint family, likes well-drained, alkaline soil and is drought tolerant. It can thrive in high temperatures.

They added lime and mushroom compost, covering raised rows with black landscape cloth. They added no fertilizer and use no pesticides or weed killers. And, there’s no irrigation.

They ordered 1,400 lavender plugs, Lavandula angustifolia ‘Hidcote’ and ‘Munstead’ varieties, both English species, which are more cold- hardy than the French types.

The tiny plants arrived from mail-order companies in late spring, too late to plant. They were transplanted into 6-inch pots.

When finally ready to put them in the soil, Charles burned holes in the black plastic using a coffee can as a barrier. In hindsight, they might have made the holes bigger from the start, although the smaller holes provided better weed control for the plants when they were small.

An auger bit made quick work of digging the holes. With the help of both children and two other helpers, they planted all 1,400 plants in a single day.

Unfortunately, many of the plants got web blight, a fungal disease. Half of the Hidcote died, as did some of the Munstead.

“There was a lot of rain that first year,” Debbie recalled.

To help keep the lavender from experiencing “wet feet,” a load of white stone was ordered. The burn holes were enlarged so stone could be added around each plant.

In the spring of 2016, new plugs were ordered: ‘Melissa’ and ‘Royal Velvet’, which are both English varieties, and Lavandula x intermedia ‘Provence’ and ‘Phenomenal’.

Lavendula intermedia, also known as French lavender or lavandin family, are hybrids — a cross between Angustifolias (English) and usually the Stoechas, also known as Spanish or spike lavender. Phenomenal is a new, patented plant that is proving to be more winter hardy than most intermedias.

Debbie keeps an elaborate spreadsheet to track which variety is where, right down to the individual plant.

The new plants are doing well. The Hidcote, after the surviving plants were cut back to improve the roots, is struggling. The Munstead owered in mid-June.

“The owers came on so fast!” Debbie said. “I was so busy watching the bees and butterfflies that I lost track of when to cut them until it was too late.”

When she harvests, Debbie said, “I grab a bunch, cut it with a Japanese sickle, and fasten it with a rubber band.”

Bundles are hung to dry in the shop. It takes two to three weeks. After they dry, Debbie makes products to sell, including bath salts, fire starter bundles and neck wraps which can be heated or cooled. The neck wrap, which also contains flax seed, is her best seller.

At the Lion’s Club “Frog Fest” in Federalsburg in June, she sold lavender lemonade, lavender bunches and lavender ower crowns.

She found a bud cleaner on the Internet, which helps remove dust, chaff and stems. The cleaned buds are sold in lavender sachet pouches.

For now, sales are online via Facebook and Squareup Shop. Debbie also has sold products through Shore Gourmet Denton Market. When there’s a bigger supply of flowers, she will sell dried bunches.

The Brohawns joined the U.S. Lavender Association, which meets every other year, and attended one of their conferences. It has been a great source of information.

“There is a private chat group where you can pose questions and get answers from more than 30 people,” Debbie said. There’s also a regional group that meets once or twice a year.

Debbie also has learned from her own mistakes. “It’s better to leave stems long through the winter so the stems keep snow off the base of the plant. Some people use row covers, but we haven’t.” The plants that she cut way back in the fall died. “It’s better to cut them back after the first bloom,” she said. 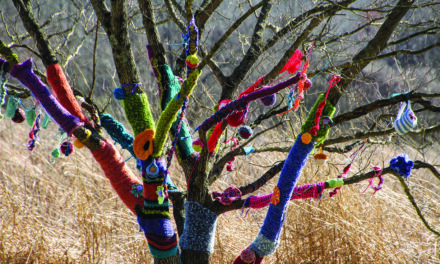