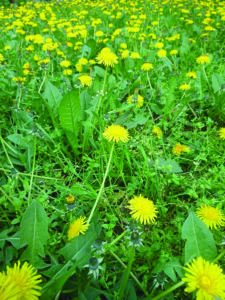 Some are starting to cast kinder, more forgiving eyes on the belatedly beleaguered dandelion, revisiting folklore and family recipes from earlier times, indicating an appreciation for previously neglected benefits as edible and drinkable ingredients.

Having a pristine lawn — an enviable lush, green, monolithic, manicured carpet of sod or turf grass — has long defined homeowner pride and curb appeal.
How this ideal took hold on the American homefront has been the subject of scholarly and popular exploration.
Many have credited famed 19th century landscape architect and Central Park designer Frederick Law Olmstead, who brought the idea of an expansive urban greenway to the forefront of public spaces, estates and after estates were subdivided, as a new aesthetic of uniform front yards for residential developments.
Other developers, including the builders of Levittown neighborhoods throughout the country, followed the same template.
Some observers also point to people being able to view The Master’s golf tournament in color on television in the 1960s as providing a powerful wow factor inspiring people to aspire to recreate it.
Until recently, the relentless quest for attaining a uniformly attractive lawn was among the few things people everywhere could agree on.
That consensus carried over to the view that there was no greater nemesis blocking the path to lawn loveliness than the peskily perky and equally relentless dandelion.
Known by botanists as Taraxacum officinale, they belong to the Asteraceae group of widely welcomed flowers including Daisies and Sunflowers. Historically they’ve been commonly called Lion’s tooth (from the French dente de lion), Priest’s crown, Swine’s snout, and blowball.
Though still considered a bane by many, there’s been a growing awareness that the care and feeding needed to eradicate them, especially the use of synthetic pesticides, does harm to an increasingly vulnerable ecological landscape.
Chemicals make their way to area waterways and the Chesapeake Bay, and crucial wildlife who eat treated plants are disappearing.
The University of Maryland Extension Service is among numerous educational community outreach programs sharing this view and hoping to change perceptions and practices.
Jon Traunfeld, University of Maryland Extension specialist and home/garden service director, noted that “we are trying to convince people to accept weed species in their lawns, including dandelion, clovers, wild violet, fleabane, etc. and encouraging homeowners to reduce lawn size when practical and appropriate.”
And it appears that some of the efforts are beginning to have a positive effect.
“I think there is more buzz and interest in sustainable land management.
“The problem is that a high percentage of homeowners, even if they ‘lean green,’ still have a hard time accepting weeds in lawns. This has to do with aesthetics and concerns about being out of synch with neighbors and reducing property values. Weeds and lawn weeds are still two of the most visited pages of our website!” he added.
Still, some are starting to cast kinder, more forgiving eyes on the belatedly beleaguered dandelion, revisiting folklore and family recipes from earlier times, indicating an appreciation for previously neglected benefits as edible and drinkable ingredients. A recent article in Modern Farmer magazine, Cherry Hill, N.J., mixologist Danny Childs provided tested recipes for a traditional Spring Tonic cocktail, Dandelion Root-and-Flower infused gin, as well as dandelion wine.
Childs cited a long European tradition of using dandelion not only in wine but also as a substitute for hops. Foodies and folklorists alike have mentioned making jelly, tea, coffee substitute and salads from them. A series on Depression-era cooking noted the dandelion’s importance as a readily available fill-in ingredient during those difficult days.
Others have pointed out that although the dandelion is deemed an invasive, its seeds came courtesy of the earliest Europeans in the 1600s, who carefully carried them across the Atlantic. Once here, they readily dispersed and took hold via windblown seedheads and deep, tenacious taproots which will send forth additional plants if not entirely dug out or poisoned.
According to the Mt. Sinai health system website, Native Americans used boiled dandelion to treat kidney disease, swelling, skin problems, heartburn and upset stomach. Traditional Chinese medicine also incorporates dandelion to treat stomach problems, appendicitis, and breast problems including inflammation and lack of milk flow. European practices involved dandelion derived remedies for fever, boils, eye problems, diabetes, and diarrhea. But the site also confirms, as does the National Institute for Health, that there haven’t been any definitive scientific studies indicating proof of dandelion’s actual medicinal value.
As Traunfeld mentioned, even those inclined to garden in a more ecologically responsible way, the debate about dandelions continues.
When members of the Facebook group Maryland Area Gardening for the Environmentally Conscious were asked to comment pro or con, 73 people responded with varying levels of tolerance, appreciation, and abiding aversion. Some felt they were beneficial to bees and therefore should be left alone, but at least one pet owner reported that their dog had become highly allergic, sealing the fate of that lawn’s dandelions.
It’s likely that others polled might agree with one gardener whose overriding desire was to simply throw in the trowel: “I’d never have time or energy to pull all the dandelions in my garden. So they stay!”
For general information, visit https://extension.umd.edu/resource/dandelion. Also see the University of California Statewide IPM Program (UCIPM)’s YouTube video How to Remove Dandelions, and the Georgia Wild Resources Department article, Out My Backdoor, In Defense of Dandelions at https://georgiawildlife.com. 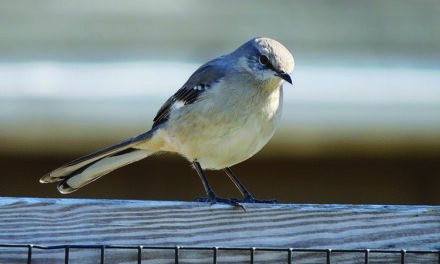 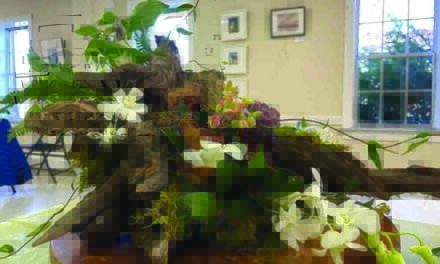 Don’t be naive: Give a native cutting garden a try

‘A great way to grow the plants I love’