Did you happen to find a fallen bird egg? 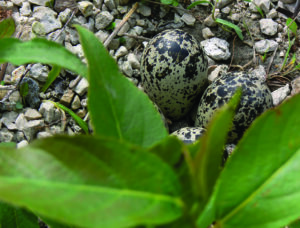 Discovered eggs may be from intentionally left in nests on the ground from species such as Killdeer.

Images of bird eggs nestled in nests are among the sweetest annual offerings of springtime, but sometimes the eggs go astray, landing in lonely spots on the ground.
When coming across such a wayward specimen, the instinct to rescue often kicks in, but often carries a caveat contained in handed down warnings to never touch an egg for fear that the mother will reject it.
Would-be backyard saviors are often stymied, wondering if there’s anything they can or should do try and salvage the tiny life to be.
Finding not one but two light blue eggs in my yard my first instinct was to help however possible.
Spotting a nest in a small tree I brought out a stepladder and, using gloves, carefully set the stray eggs inside, hoping for the best, knowing that at least I’d tried.
But I continued to wonder what the best course of action to take would be should it happen again, deciding to ask folks with far more experience and knowledge of bird behavior than I had to draw on.
Rhonda Matterson, who along with husband Tim owns Wild Birds Unlimited in Easton, provided some guidance.
“The best thing you can do is respect the Migratory Bird Treaty Act and leave the egg alone,” she said. “Don’t try to ‘foster’ the egg. That is illegal for wild bird eggs. In most cases it is unlikely that the egg would hatch. Plus, the egg may not be abandoned. It may be from nests on the ground from species such as Killdeer. If you know the egg is from a rare or endangered species, call your state fish and wildlife agency or a wildlife rehabilitor.”
My nearest such agency, Blackwater National Wildlife Refuge in Dorchester County, advised that “if an egg is found on the ground, we recommend just leaving it alone.”
The National Audubon Society responded with additional insight and information, which somewhat put my mind more at ease.
“There can be many reasons why an egg was removed from the nest, but if you want to be on the safe side, there’s nothing wrong with putting the egg back if you can. Your touch won’t cause the parents to reject it. There may be other reasons that the egg doesn’t hatch — it was never viable, its an egg laid by a different bird, or it was on the ground for too long — but human touch isn’t one of them.”
Audubon also noted that in any case, “other animals also feed on discarded eggs, so losing one here or there is part of the natural cycle for most species.”
In the event that you happen to find a nest on the ground, the Audubon experts agreed that it was unwise to handle it.
“Nests should be left alone as much as possible, and, in some cases it may be illegal to disturb the nest (if from migrating or protected species.) Some bird species lay their nests directly on the ground, so not every nest found there is out of place. The parent may or may not be around whether visible or not and will return to incubating eggs or brooding any nestlings. If there are concerns about its safety, for instance if a field is about to be mowed, contact local wildlife officials and rehabilitators or flag it yourself for your local USDA or County Conservation District Office.”
For more information, visit the National Audubon Society at https://www.audobon.org.

Ride out the winter in the garage 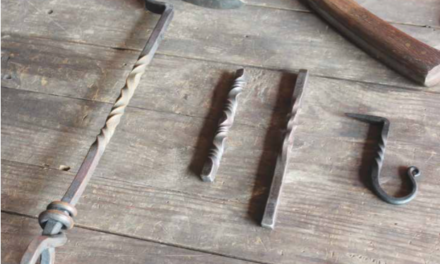