Looking at the history of the winter white sale 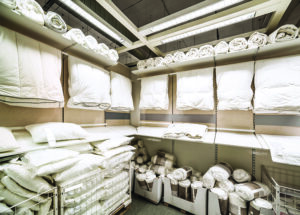 Napkins, tablecloths, bedding, towels and clothing were all something that any decent 19th century household needed, but maybe didn’t get too excited over. John Wanamaker changed that by creating a “fresh new year with a winter white sale,” and has been a success of marketing that still lasts through today.

anuary brings snow, cold, and the end of the holiday season. Marketing techniques from 1878 are still utilized today, with the invention of the Winter White Sale, the potential excitement generated by otherwise mundane products such as linens, into a tradition started by a department store owner in Phildadelphia, looking to make the new year and winter months profitable.
John Wanamaker was a businessman and entrepreneur living in Philadelphia at the later part of the 19th century.
Even in those days, marketing to potential customers was important.
As the owner of a city department store, he was pressed to find ways to get consumers interested in products after the holiday rush.
His idea was to present something fresh, like a new start for a new year.
There had to be a way to join customers to his new idea, and the search was on as to what to employ for his tactics.
Wanamaker’s Department Store in a large city like Philadelphia needed marketing strategy on many levels. John Wanamaker was a pioneer in marketing and technique, and many of his ideas and concepts, including the price tag, fixed priced systems, money-back guarantees and strategic sales are just some of his innovative, savvy business ideas that many business models have copied over time, for business success.
Linens, being made mainly in the colors of white or off-white, were something that were normally not a luxury, (although there were some of those items available), but more of a necessity.
Napkins, tablecloths, bedding, towels and clothing were all something that any decent 19th century household needed, but maybe didn’t get too excited over.
John Wanamaker changed that by creating a “fresh new year with a winter white sale,” and it was a success.
People liked the idea of white representing a fresh new start, associating it with January and snow, and having a tradition to adhere to after each holiday.
As production standards changed, and styles and tastes progressed, the linen, bedding and clothing industry was able to add print, color and patterns more readily and by the 1950s, things went from white to a multitude of colors.
The “White Sale”, however, continued, and just included these items, as well as sales on linens and bedding of all kinds, as well as household items, kitchen supplies, and more.
Any way to get the consumer in the stores and buying items after the Christmas and holiday season was key.
Sales concepts from a savvy Philadelphia businessman trying to persuade customers to have a fresh new year began a tradition, that even to this day, people have come to expect and consider, even after large purchases during holiday times.
Consumers like discounts, sales, and traditional, solid, reliable continuity in their shopping, and John Wanamaker provided a winter tradition with the white sale that lasts even to this day, whether it be online or in person, as modern times change the face of retail.
What stays the same are marketing techniques, such as the ones employed by Wanamaker in 1878, that still ring true and are utilized to this day, such as the suggestion that winter whites promise a fresh new year, full of possibility, clean white linen like the snow of January, and new beginnings.