Bringing some Spain to the Shore 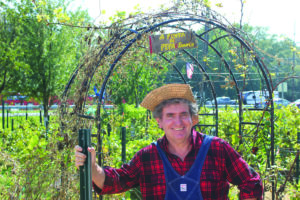 Miguel Figueria brought some of his native Spain with him to Cambridge, turning his whole yard into a vineyard. (Photo by Sean Clougherty)

Where Miguel Figueria grew up in Spain along the Atlantic coast, small personal vineyards were ubiquitous.
Families raised the grapes, made their own wine and shared it with other families throughout the year at celebrations or for no other reason than being neighborly.
“We do entertainment all the time. In Spain, it’s all about eating,” Figueria said.
When he settled in his current home outside of Cambridge in 2010, he brought that part of Spain with him in establishing his own vineyard.
He started with 12 vines, but “little by little, I kept planting,” he said, and soon his backyard of just more than a half an acre was filled with 400 vines of varietals representing six countries: Italy, United States, Spain, Argentina, Chile and Germany.
Each country has its own section and a “Porto” entranceway wrapped in rose bushes.
Two years later, Figueria added a string of fruit trees at the edge of the property next to a busy highway in order to create a buffer from the traffic noise.
Now the healthy trees provide several spots for shaded relaxation.
“I wanted something just for me, something different,” he said.
But Figueria has not kept what the vineyard produces all to himself. He makes about five different wines each year, under the label, “Fig’s Choice.”
He often blends varietals, tweaking recipes a little each year for taste and experimentation.
“Sometimes you try something new and see how it tastes,” he said. “I enjoy diversity, some from one country, some from another,” he said.
Most of the wine is shared with friends or used during parties he has at his house throughout the year.
Figueria grew up on his parents farm in Galacia, the northwest region of Spain.
After high school Figueria came to Baltimore and worked at the prestigious Mediterranean restaurant Tio Pepe.
He worked there 20 years, moving up the ranks from waiter to manager before going to college and becoming a teacher.
Along the way, he made lifelong friends in the restaurant industry, many whom still visit the vineyard and come to the parties.
“We almost grew up together through the restaurant,” he said. “It’s like a family.”
The vineyard is very much a labor of love, he said, and there’s been a lot of labor.
Figueria, with intermittent help from friends, planted all the vines by hand, set up the trellis and irrigated new vines to help get them started.
Each year, there were periodic applications of fertilizer, annual pruning and he sprays the vines about six times through the season to manage plant disease and pests, especially the Japanese beetle.
The workload in the vineyard, along with his penchant for throwing parties, led him to cover virtually all his non grape growing space with patio pavers.
Birds can be a problem too.
Netting over the vines helps, but recently he said he has been traveling back to Spain more often to visit his parents, taking away from what he can do in the vineyard.
Where he usually gets about 80-85 gallons of wine from the vineyard each year, bird damage in his absence skyrocketed this year to cut his yield almost in half.
That hasn’t dampened his spirit at all though.
He harvested the grapes this year in the first weeks of September and pressed them later into the month.
It may be less then past years, but the wine it makes will continue to bring friends together.
“I enjoy myself here,” he said. “I love it here.” 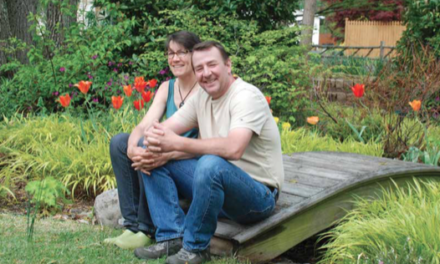