(This article marks the third in a series that will focus on historic farmhouses in Caroline, Dorchester and Talbot counties. These homes have been in the same family for decades, and are being given new life by the younger generation that now lives in them.) 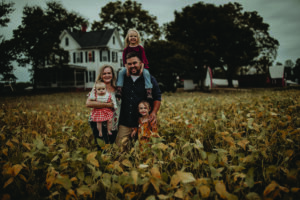 Outside the town of Preston, around the corner from a horse farm, up on a rise and down a gravel lane is the home of Matthew and Jamie Taylor and their three daughters Maybelle, Daisy, and Magnolia.
Purchased at auction in 1966 by Matthew’s grandfather, Wesley Taylor, the house had no plumbing, electricity or insulation, and an outhouse sat out back.
Some of the first improvements Matthew’s grandfather made were turning a pantry into a bathroom and fishing wiring up through the walls in order to provide the house with electricity. A contractor drilled holes through the exterior walls in order to blow in insulation.
Matthew’s father Calvin grew up in the house along with his three sisters, until they eventually moved on and bought their own homes.
Calvin’s sisters expected him to move into the house, Matthew said, but he responded with: “I don’t want to make this house a place where old people go to die. Someone should be able to raise a family there.”
Following this notion, he offered it to Matthew’s sister Laura and her husband.
They lived on the first floor of the house for about two years while they were shopping for their home.
After they moved out, Calvin offered it to Matthew and Jamie. Although the house needed a great deal of updating, they accepted the challenge.
They would do this while farming hundreds of acres of grain and produce, managing three poultry houses, growing their produce business, Taylor’s Produce, expanding their floral design business, J. Starr’s Flower Barn, and raising three beautiful children.
Over the past eight years, Matthew and Jamie have been tirelessly remodeling the house and making it more energy-efficient.
“Our first year here we spent about $5,000 on oil,” Matt recalled. In an effort to find a more affordable yet efficient means of heating the home, they opted for an outdoor wood-fired furnace.
After Spicer Bros. Construction removed the asbestos shingle siding, padded out the windows, wrapped the house in fanfold insulation and Tyvek, and installed vinyl siding, the house was immediately more comfortable. What used to take 15 cords of wood to heat the house now only required nine.
Matthew and Jamie then moved on to making the house more functional for their family.
A small room at the top of the stairs that was also connected to the master bedroom, perhaps a former nursery, was turned into a closet.
Worn carpeting was removed to reveal beautiful heart pine flooring.
The front porch is being enclosed in order to create a comfortable entry space for the family and their guests. They plan on using thin brick as flooring in keeping with the house’s aesthetic.
Jamie looks forward to a kitchen remodel in the future, where she will design a more open-concept space with additional lighting.
A sunny second-floor covered porch that overlooks the backyard will one day get some new flooring and some comfy furniture for lounging.
As it goes with home improvements, all things are in due time.
When asked what has been particularly challenging about remodeling the home, Jamie readily replied “Wallpaper!”
The walls and ceilings in almost every room were covered in layers upon layers of wallpaper, like an onion of home decor trends from years gone by.
The front room, with a beautiful mirror-topped mantle and hexagonal front wall, had no less than three different patterns of wallpaper.
“It was like one of those optical illusion pictures, if you looked at it too closely, you’d start to feel dizzy,” Jamie said.
However, removing the wallpaper in some of the rooms led to pleasant surprises.
In Matthew’s father’s childhood bedroom, hidden under a layer of floral wallpaper, was wallpaper depicting a farm scene with barns and livestock.
They carefully saved a piece and framed it along with a poem he had written as a young boy about wanting to be a farmer one day.
This sentimental gift now hangs in Calvin’s office.
Sentimental aspects of the home and property abound.
When remodeling the bathroom that was once a pantry, Matthew and Jamie found the original beadboard walls with the painted outlines of shelves and bins that once held dry goods and canned preserves.
They salvaged the beadboard to use on the bathroom walls, with Jamie painstakingly removing every nail that had secured it to the original studs in the wall.
The mirror frame in that bathroom, crafted by their contractor and family friend, is made of wood from one of the stalls in the old barn behind the house.
A narrow “servants’ staircase” in the back of the house leads from the first-floor playroom (formerly a kitchen) all the way up to the spacious third-floor attic.
“I grew up in an old house that had trim just like this,” Jamie said with affection as she lovingly touched a rosette molding block on the kitchen door frame.
Outside, the grapevines and black walnut trees that Matthew’s grandfather planted are still bearing fruit.
Every spring, Matthew still puts up his grandfather’s purple martin house for the colony that has been summering there for decades.
While some of the aged fruit trees had to be removed, the family plans on replanting some in the future.
A small wood-sided milkhouse a few steps away from the front door, once used to store root vegetables and cans of fresh milk, serves as a charming reminder of the advancements that have been made in refrigeration.
The farmhouse life is not an easy one. The Taylors’ house needs frequent maintenance and has odd quirks, like the door to Matthew and Jamie’s second-story porch that whistles during storms.
It’s the price couples like Matthew and Jamie are paying to preserve a beautiful piece of history for the next generation, making memories and instilling a love of agriculture in the process. And for them, it’s worth every penny.

Stay a cut above with strawberries in your diet

A cheeseboard a must for party spreads