(Editor’s note: This is the first of three-part series focused on art and antiques of the Eastern Shore. DeeDee Wood is the owner of Black Cat Curiosities, an online antiques research and sales venue.) 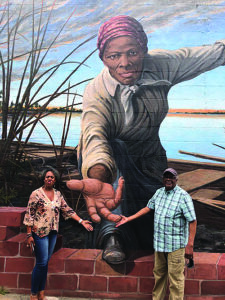 The museum building features not only antiquity, wonderful artwork, videos and vital informational displays, but also a popular, powerful and moving Harriet Tubman mural, “Take My Hand,” by artist Michael Rosato, commissioned by the Dorchester Center for the Arts and completed in 2019.

It’s traveling time, and time for an antique roadtrip in and around the Eastern Shore of Maryland.
For the next three months local museums and places of interest off the beaten path will be showcased for their antiques, antiquity, various artworks and missions.
This month’s featured destination is the Harriet Tubman Museum and Educational Center, in Cambridge, Md.
Harriet Tubman, (born Araminta “Minty” Ross, c. March 1822–March 10, 1913) was born in Dorchester County, Maryland as an enslaved individual.
A “conductor” on the Underground Railroad and political activist, Tubman was able to eventually escape, only to return on some 13 rescue missions, helping 70 people (including family and friends) utilize the network of the UGRR to make their way to freedom. During the American Civil War she also served as a scout and spy for the Union Army.
Tubman was also a political activist and participated in the women’s suffrage movement, as well as humanitarian efforts.
The Harriet Tubman Museum and Educational Center in Cambridge, Md., was started in the 1980s and, according to William Jarmon, Jr., president of the Harriet Tubman Organization, the original mission statement was to “make the general population aware they have a local icon, born and raised in Dorchester County.”
As time has progressed, Linda Harris, the museum’s docent and Public Relations Officer, includes, “the mission also encompasses promoting the life and legacy of Harriet Tubman, as an enslaved individual, and recognizes her first 27 years in Dorchester County.”
For the antiquity and antique portion of our roadtrip, a visitor to the museum can view some of their collections on display.
They have antiques and antiquity items, found in the Bayley House on High Street, just a few blocks from the museum.
Some of the items included in this collection are butter churns and primitive tools like old oil lanterns and coffee grinders, used in the daily tasks of keeping an estate.
Signage that accompanies the encased objects indicates that some of these items could have been used by enslaved individuals working at the estate.
The museum also has an interesting series of antique photographs of Harriet Tubman, in various stages of her life, from her Dorchester County endeavors in a time period when she would have been a “conductor” on the Underground Railroad, to Civil War days when she was a scout and a spy, to her later years when she lived in Auburn, N.Y.
The photographs are displayed in a series on the wall of the museum.
Other items of interest in the museum are a 1669-1969 Tercentenary Dorchester County plate, a rather impressive, framed collection of Harriet Tubman stamps on special envelopes, a wealth of murals, pictures, paintings and artwork, such as bronze busts of the famous abolitionist, and more.
There are other items of interest displayed in the museum as well, and it will take some time to read all of the copius amounts of vital, rich information included with each antiquity or art form.
The museum building features not only antiquity, wonderful artwork, videos and vital informational displays, but also a popular, powerful and moving Harriet Tubman mural, “Take My Hand,” by artist Michael Rosato, commissioned by the Dorchester Center for the Arts and completed in 2019.
When asked to pose in front of the mural for a photo, Jarmon and Harris both took her hand in theirs, and Harris said, “you can take her hand and either go to the past with her, or the future, the choice is yours.”
The museum has many different ways in which it supports their endeavors.
There is an annual fundraiser the on the second Saturday of March each year, 2022 will mark Harriet Tubman’s Bicentennial and will have a celebration, and Jarmon and Harris state that their will be upcoming events such as Storytelling, a Children’s Book Club, Craft Workshops, and Jazz at the Mural.
For more information on the Harriet Tubman Museum and Educational Center, contact president William A. Jarmon, Jr. or Docent and Public Relations Officer Linda Harris by visiting the center at 424 Race Street in Cambridge, Md., Thursday-Saturday 12-3pm, or by phone at 410-228-0401.