Our American flag is known as “Old Glory,” “Stars and Stripes” and “Red, White and Blue.”
Antique collectors sometimes enjoy collecting Americana memorabilia. There is no greater symbol of American pride and memorabilia than the United States flag, an enduring symbol of freedom for our nation. It has a rich and detailed history, along with some interesting and important facts.
On June 14, 1777, the Continental Congress passed an act that established a new flag for a new nation, consisting of symbolism, representation and significance. 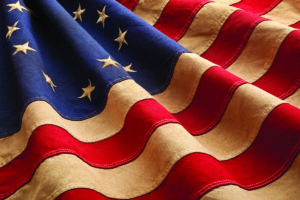 Origins of the very first flag are unknown.
Some historians who have done extensive research on the matter believe Philadelphia seamstress Betsy Ross sewed the first flag, under the direction of the designer, New Jersey Congressman Francis Hopkinson, although there are conflicting views of original design and sewn products, leaving the exact origins shrouded in the mists of time.
Today’s current American flag consists of 50 stars, 13 horizontal stripes, seven of which are red, alternating with six white stripes.
The 13 stripes symbolize the 13 original colonies, red representing valor and hardiness, white for purity and innocence and blue for vigilance and justice.
The stars represent the 50 states of the union.
The flag has had numerous changes throughout time, including size, shape and the number of stars added, as each state in the union came into being.
The United States House of Representatives states that, “the star is a symbol of the heavens and the divine goal to which man has aspired from time immemorial, the stripe is symbolic of the rays of light emanating from the sun.”
Many collectors of American flags look for the very old products, such as the Colonial flags that represented the first 13 colonies, with a circle of 13 stars in the blue field.
Before 1900, there was a lack of any specific design for flags, so collectors can find many different versions of the American flag from early years, left up to the interpretation and imagination of the early designers.
Unlike other antiques, flags were often used outdoors, and war flags went through many different kinds of damage. Because of these outdoor hazards, flags are not always expected to be in perfect condition.
The flag inspires many avenues of creativity in our country. Amateur poet, Francis Scott Key, witnessing the flag still flying high above Baltimore’s Fort McHenry in 1814 after a British attack, was inspired to write “The Star Spangled Banner”, which became the United States official national anthem in 1931.
In relation to a song, a famous allegiance, “The Pledge of Allegiance,” inspired by the flag, was written by James Upham in 1892, and first published in The Youth Companion magazine, as a way to show youth how to celebrate patriotism.
Old Glory has rules and display procedures that need to be met to keep the preservation and standards of the flag. Among many rules too numerous to mention in this article, the flag is only to be displayed sunrise to sunset.
It is supposed to be displayed on election days around polling stations, and raised every day school is in session.
The U.S. flag should never be allowed to dip toward a person or touch anything beneath it. Antique collectors can find rules for flag display printed on old cards that were once displayed with flag purchase displays, as well as flags in frames, quilted versions and other décor.
Antique collectors can also find the stars and stripes in campaign slogan ads, banners and election material from many parts of our American history.
The history of our flag is one of change. As states were added to the Union, the flag and stars changed on the flag, making it possible to collect and display many versions of this symbol of freedom.
The flag has many inspirational creations that have spun off of the concept of freedom and endurance, and will forever be a favorite collector item in antique Americana memorabilia.
(Editor’s note: DeeDee Wood is the owner of Black Cat Curiosities, an online antiques research and sales venue.)