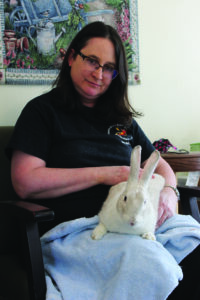 2020 was a big year for the Eastern Shore Rabbit Rescue and Education Center. Housed in a tiny building in Rock Hall, the rescue, since it began in 2012 has placed more than 200 rescued rabbits in new homes and last year was responsible for 83 of them.
People were stuck at home under state shelter-in-place orders, much of their daily routine was rearranged or canceled altogether and getting a pet to help pass the time looked like a good idea for people.
“Getting a rabbit is a big commitment as far as time and when they found they had more time, then they had interest in adoption,” said Cora Dickson, president and founder of the rescue.
Dickson said she started out a cat person but her husband was allergic.
When they moved from Washington D.C. to the Eastern Shore they adopted a rabbit as a pet, but had to travel back across the Bay to do it.
“That’s when it started,” she said. “I thought, ‘Oh, I could do something like this.”
As recued rabbits come and go, the ESRREC keeps 10-12 rabbits in its center, but also has about 50 placed with foster families while adopters go through the evaluation process.
Emergency situations where the rabbits are in danger take precedent, she said, and rabbits on the Eastern Shore also get preference in foster placement.
“Saying no is so hard especially now when we’re getting so many requests,” Dickson said, adding many of the requests from out of the area are referred to other rescues and shelters.
Part of the rabbits placed are as bonded pairs, either matching a rescued rabbit with one a family already has or bonding a pair at the center for placement together. The companionship is helpful to the social animals and as they do almost everything together, the workload isn’t that much more that having one rabbit.
Dickson calls it “bunny speed dating,” although it’s not something they rush through at the center.
A big part of the adoption process is education. Dickson said it’s often that prospective adopters come to the center with incorrect information about keeping rabbits or aren’t completely aware of what is involved. With an average lifespan of about 10 years, keeping a rabbit should be seen as a long-term commitment. Rabbits are big chewers so a certain amount of “rabbit proofing” is needed in the area they will stay. Water bottles are not a good option as they can damage the animal’s teeth and hay is a far better betting material than wood shavings, despite how it’s presented at pet stores.
“It’s just not natural for them to drink from a bottle,” Dickson said. “A lot of people get confused. I’m always not just educating but I have to debunk a lot of myths.”
As the only rabbit rescue in Maryland to have it’s own facility, Dickson said it’s helpful in getting rabbits and families together and educating them on good practices.
“It’s a lot of work to maintain a shelter. I think it’s been our best asset,” she said. “This is special. I like having a building for it. I think it’s better for the adopter to have a neutral site to come to.”
The center is completely staffed by volunteers, including Dickson, and supported by donations, adoption fees and fundraisers like its Hop-a-Thon and a 5K run/walk event.
“Somehow we get enough donations to cover everything,” Dickson said. “I think people just figured out we were doing something good.”
There are a lot of reasons for a rabbit to be rescued.
A family moving to a new home that doesn’t allow pets, a hoarding situation where the animals aren’t fed and cared properly, or a family realizing it’s more than they want to take on, are all reasons rabbits reach the center.
Dickson said the latter, especially related to bunnies given as Easter gifts, has fallen some.
To some degree, ongoing campaigns have discouraged the practice for people more interested in the novelty of giving a child a bunny on Easter than helping them raise a pet, but she also said it’s a good time to spread awareness of properly caring for rabbits.
From her perspective, dogs and cats don’t have a major holiday centered around them like rabbits do.
“It’s our chance to teach them,” she said. “We can use it to our advantage.”
Moreso, her concern now is those 80-plus rabbits that have found new homes in the last 15 months. As people return to a closer version of pre-pandemic life, she hopes caring for their rabbits stay part of their routine and they don’t come back to the rescue.
“I am just hoping that if they adopted a pet during a pandemic they would be more devoted,” she said. “We’re hoping that we’re setting these rabbits up for a long-term family.”