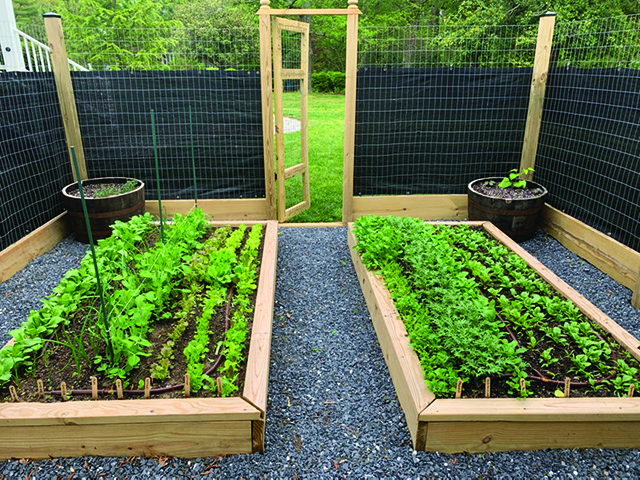 Self-described “novice lettuce grower” Page Lansdale was also his family’s lone tomato lover, and he brought forth a crop a few years back.
But, in a Claiborne neighborhood laden with Master Gardeners, he yearned for his own vegetable garden.
As if by fate, a friend recommended Jena Paice to help prepare a special dinner.
“It was then I learned that she was not only a gardener but a farmer and designer,” Lansdale said. “I built three raised beds with a fence around them for protection from deer and other critters. She came over and asked what I liked to grow and eat. Then she took it upon herself to design what is used and where in the beds. She found large basket-type bowls and placed them in the corners for herbs and flowers.”
Lansdale is one of several Talbot County garden dreamers who unearthed veggie bliss in their own backyards with help from garden guru Paice who operates Spirit Grower, a local organic farm.
Two of the beds grow vegetables, with one devoted to flowers, a gift to Lansdale’s late wife, where he’d planted 300 tulips, with 299 coming up. He said Paice introduced him to spring, summer and fall growing seasons he characterized as “really, really fun and enjoyable.” And, successful, growing so much he’s had to give a lot away.
“I’ve told my next-door neighbor that she never needs to buy a bag of lettuce ever again from the grocery store,” he said.
With springtime still pretty cool, he’ll be planting lettuces, radishes, carrots, and any kind of leafy or wilting greens like collards or spinach. “Then once that’s done, I’ll yank them out and put in summertime crops including peppers, cucumbers, and tomatoes, which really like hot weather. And when that runs its course and cooler weather returns, back to leafy greens,” Lansdale noted, adding how pleased he’s been with the quality of her transplants, all grown by her from seed.
Always a gardener at heart, Francine Savage’s former home in Minnesota was featured in a gardening magazine, but back then she was mainly focused on flowers. For years, she said she’d torn out pictures from magazines, envisioning what her dream vegetable garden would look like. While still in Minneapolis, she ordered a small, raised bed garden from Williams Sonoma and started a patch.
Originally from Virginia’s Eastern Shore near Chincoteague, Savage loved visiting St. Michaels. In 2018 she purchased a vacation home there and retired to the spot a year later. With the home came two dilapidated raised beds.
Meeting Jena often while at the Farmer’s Market over the summer, she would regularly share plans for upgrading her current facilities to better enable “pandemic gardening.”
“I figured it would be a good investment to grow more of my own produce, plus I didn’t want to make too many trips to the grocery store,” Savage added.
As fall approached, Savage contracted landscape designer Jennifer Connolly to build four new raised beds, manicured with formal accents of boxwoods and pea gravel, perfectly conjuring her favorite clipped image.
Then, “Jena took charge of everything going into the raised beds,” Savage recalled, after first asking her what she liked. “We did collard greens, kale, spinach, swiss chard, all kinds of lettuces, radishes, broccoli, mustard greens, and bok choy. She also introduced me to some spicier Asian greens for salads.” Well into February, Savage reported, the greens were still growing, thanks to the hoops and covers extending the season.
Kerry Folan met Paice last Spring during a “Pop Up” market at Pop’s Old Place grassfed beef farmstead in Hurlock, purchasing some starter heirloom tomato plants for the summer.
Growing up in Montgomery County, Folan remembers her parents raising tomatoes and herbs. But living in New York City until 3 and a half years ago, she’d really never had much of her own garden before last summer.
“I had such a good time with it, and especially considering the state of the pandemic, I thought it would be a good idea for my own mental health to be outside, so I wanted to keep it going. But I was a little intimidated because I didn’t know what special treatments I’d need for the plants for winter, or how to set them up. I had noticed on Jena’s website that she did consulting, so I reached out to her,” Folan recalled.
Currently living on a small property in Easton’s historical district with raised beds in the backyard, she appreciated Jena’s insight into how to best use the limited space.
“She told me what to plant where and exactly how to plant it and did a demo,” Folan recalled. “Because I was on a tinier budget, I did the actual planting, which was great too, because for me, that was part of the fun of it, I literally wanted to get my hands dirty, so it worked out really well.
“I grew three or four different varieties of mustard greens, three or four different varieties of kale, beets, a bunch of different lettuces including arugula, beets and spinach. I’m kind of a food person so was familiar with a lot, but she suggested some different kinds of greens to mix in with salad to make it kind of fun which I never would have thought of. Pretty much every day until the end of December I was eating a salad from my garden. I felt so healthy,” Folan added.
“Doing it once and having success, having it work well, makes you eager to try again. I’m really excited to plant for spring, and looking forward to learning more about growing tomatoes from Jena’s workshop,” Folan stated. 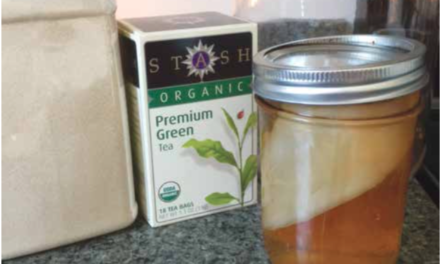 Garden refresher: ‘New to you’ or tried-and-true? 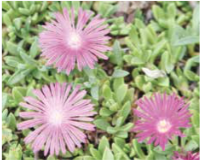 Will your succulents survive the cold?