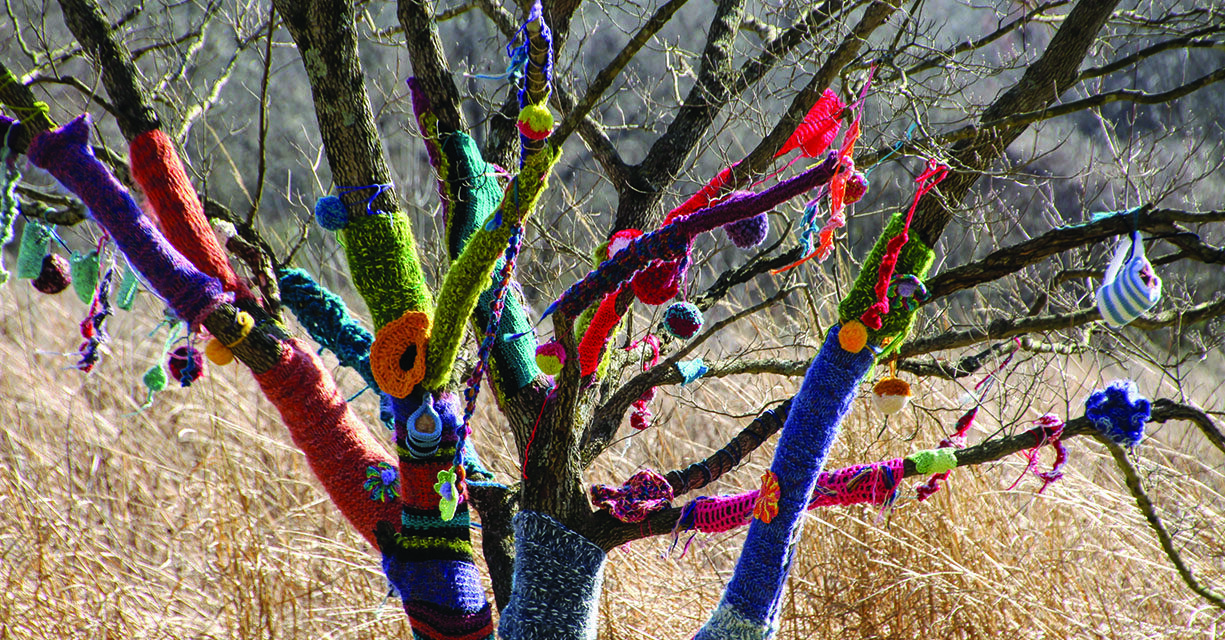 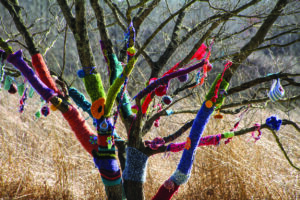 In a drab time of year, the Adkins Arboretum’s Yarnstorming event brings a full dose of color and creativity. (Photo courtesy Kellen McCluskey)

Before the trees at the Adkins Arboretum naturally show their color this year, a group of creative people are giving some an early burst through the center’s yarnstorming event.
With aliases like yarn bombing, guerrilla knitting and “kniffiti,” yarnstorming is a form of art employing colorful displays of knitted or crocheted yarn — and from March 6 to April 3, knitters and crocheters will display their fiber creations wrapped around and hanging from a select group of trees behind the arboretum’s visitor center, 12610 Eveland Road in Ridgely.
The arboretum had its inaugural yarnstorming last year after staffers Ginna Tiernan and Kellen McCluskey saw a yarn art installation visiting other gardens and quickly thought about how to bring that kind of color to the Adkins Arboretum.
“It just felt like joy,” Tiernan, the arboretum’s executive director, said. “I know that’s what it elicited in me when I saw it for the first time.”
Partnering with the Fiber Arts Center of the Eastern Shore, organizers selected nature’s dormant period on purpose to attract people at a time they may not normally come and to give the yarn art plenty of contrast when it’s installed.
“We’re always looking for ways to attract people who maybe wouldn’t come to the center,” Tiernan said. “The color of the yarn would be so bold against the bark and background.”
This year, along with the typical drab time of year, the center has paused its indoor programs and closed its visitor center due to the coronavirus pandemic. But the grounds are open for people to come enjoy nature and the yarnstorming event aims to assist in that.
“It made us so happy last year,” Tiernan said. “It’s just an unexpected burst of color. We thought we still had to do something this year.”
With adjustments made for safety this year, artists choose one of the oak, walnut or hickory trees behind the visitor center and then go to work at home completing components of their installations and will bring them finished or near-finished to go on the trees.
It takes planning and creativity, Tiernan said.
“People do have a vision,” she said. “The limbs and the height of the tree certainly play into it all. People really got creative, just some fun ideas.”
For taller projects of 10 feet or more, Bartlett Tree Experts offers assistance.
“It was like poetry watching them hook up to the trees,” Tiernan said of the Bartlett team. “It’s like a dance.”
After the event, the yarnstorming artists are invited to come back and take down their installations.
Those that aren’t will be handled by arboretum staff. Last year, assistant direct Jenny Houghton sewed together pieces that were left behind and presented it to Tiernan as a gift, and Tiernan said it may reappear on a tree this year.
“I’m inspired by the artists’ creativity and the beauty of their work. Yarnstorming provides an opportunity to showcase craft traditions in a new way,” Houghton said.
Yarnstorming’s origins aren’t crystal clear but many sources cite two Houston, Texas artists with its start. In the 1990s, Bill Davenport began creating and exhibiting crochet-covered objects around his home city. About a decade later, Magda Sayeg, began covering the door handles of her shop with custom-made knitted cozies.
That got a lot of attention and was copied into yarn covering of just about anything from park benches to bridges. The art has had its detractors as well, who say if it’s left long term, the yarn can impair tree growth and impact wildlife.
With the installations up a relatively short time, Tiernan said “it’s very gentle on the trees,” and Adkins restricts yarn with any glitter or sparkles and asks artists to use natural fiber in making their installations.
“We were careful on that,” she said. “Really taking time to think it through on what effect it would have on the trees and on the wildlife.”
Tiernan added with last year’s installations, she didn’t see any of the art disturbed or pieces of yarn popping up in other parts of the arboretum’s vast acreage.
Whether it’s people that came last year or someone who has never been to the arboretum before, Tiernan said she hopes the creativity puts some color, and joy, into their life.
“I’ve heard so much of how people are looking to come together in a safe way so maybe this can fit that need,” she said.

Construct wooden decorations for your garden