Flow Blue is a particular style of porcelain and white earthenware that originated, some say, by accident, in the 1820s in England.
The blurred qualities of the blue glaze as a stark contrast to the earthenware bright white background excite antique collectors of this enduring statement of patterns from the Staffordshire potters of England. 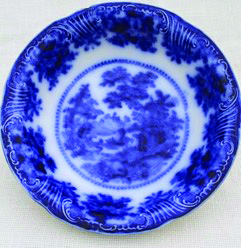 During the 1800s, especially in England, Chinese porcelain was quite popular.
The potters there wanted to copy the Chinese, so they developed a salt glaze on earthenware, which gave a very bright white appearance when fired. The secret of porcelain, kaolin, had not been discovered, and so many techniques were used to make the white body that was coveted in the upper classes who collected these items.
When the original historical plates that many collectors know of are considered, there is a type of process that happened to them to get the image onto the plate.
This technique is called transferware, and involved a series of copper plates, chemical glaze and a stencil applied to a blank white bowl, plate or other tangible good.
The object was placed in a kiln and a firing process that transferred a stenciled image onto a three-dimensional work of art ensued.
It is said that the first “flow” blue china was an accident, an over abundance of some sort of chemical or glaze that made the blue “bleed” out and blur onto the surrounding white body or background, and thus a craze began.
Some people have a theory that the look was quite purposeful, to hide inconsistencies in designs and errors, by adding lime or ammonia chloride to the kiln, causing the now famous blue pigment, a popular color in Chinese porcelain, to gently bleed together and overlay designs to cause the blurring effect.
Blue glaze was also used, a process of crushing the blue mineral known as cobalt. It was a color that all of the design houses knew would not burn off during the glazing process in the kilns.
Because it was something new and perhaps exotic, it became quite popular, and began to be shipped overseas to America, as well as being purchased in Europe and beyond.
The general time period of collectible flow blue spans from the early time period of creation from the 1820s to the 1920s.
Manufacturers such as Wedgwood and Johnson Brothers, as well as many more, created over 1500 different patterns to choose from for collections.
Popular themes were influenced by romantic Victorians, and included such subject matters as pastoral scenes, floral schemes and historically themed content.
Occasionally, a manufacturer would go overboard on the overflow of blue, and this would cause the item to be rejected.
Instead of tossing the overabundance of mistakes, these rejects where sent to the United States and this provided a market for factory seconds.
The low costs of these pieces helped establish a firm collection market in the working and middle class homes.
Mistakes can lead to happy surprises.
Flow blue’s popularity eventually fizzled out, as fads do, but in the 1980s it had a resurgence and reproductions of the once popular glaze scheme was resurrected.
Envy from a Chinese secret porcelain recipe, to trial and error and a surprisingly beautiful glaze flow caused a wonderful product to be admired, collected and manufactured for years upon years.
Flow blue china is still heavily traded, collected and considered, and many guide books and websites are available to determine the worth of your item.
(Editor’s note: DeeDee Wood is the owner of Black Cat Curiosities, an online antiques research and sales venue.)