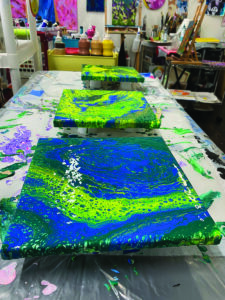 Finished paint pouring pieces dry in the Ethel Mae Studio for about a week before being ready to go home with the artist. (Photo by Meg Ozman)

“I don’t know how to paint.” … “I’m not an artist.” … “What if I mess up?”
Deanna Pratt has heard it all from her guests the first time they visit Ethel Mae Studio, a creative space she opened a little over a year ago in downtown Easton.
Pratt, a Talbot County native and mother of three, overcame these same negative thoughts when she began pursuing her lifelong passion for creating art.
She had looked into taking art classes locally in the past, but was discouraged by the fact that many of them were too expensive or held during the day when she was either working or caring for her children and grandchild.
After stepping away from her 28-year career with the United States Postal Service in 2018 due to her health, she began “tinkering and doodling with paint, markers, and colored pencils” in her spare bedroom.
She said she watched hours of YouTube tutorials before beginning experimenting with different techniques.
“It felt good to release stress,” she said, and began growing her collection of easels and art supplies.
Pratt laughed as she explained how her collection quickly outgrew the spare bedroom, and then teetered on the verge of outgrowing her garage.
One day, after having some friends over to try the paint pouring technique, one of them remarked how much fun she was having and how Pratt had a knack for encouraging others’ creativity.
At that moment, Pratt said she realized her dream to open up her own studio.
She wanted to create a space where people of all ages and ability levels could come and have the freedom to create art and experience the same joy it brought her.
With the encouragement of her husband Jerry, she answered an advertisement for a studio space in the Brookletts Building, a retrofitted warehouse located at 404 Brookletts Ave., filled with studio spaces rented by local artists and photographers.
She named it Ethel Mae Studio after her great-grandmother and grandmother respectively, both of whom were creative women that helped nurture her love for art and self-expression.
“This is my happy place,” Pratt said proudly.
With high ceilings, exposed brick, weathered hardwood floors, rustic wooden beams, and a clear view of the history and activity at the Perdue granary down the street, Pratt sees it as the perfect space for creating art, a place where anyone can put aside the stressors of life, let go of their inhibitions, pick up a brush, and, “just paint.”
To help her guests understand the value of choosing to let go of self-doubt, Pratt points out a few of the paintings hanging in her studio.
In 2019 there was a statewide call for artists, and she submitted a few of her original works.
Her art was selected and featured on a huge LED billboard in Baltimore, proof that if one only gives themselves a chance, the possibilities are endless.
On a Thursday morning, Justin Jennings brought his niece Kyleigh Jennings to the studio to try her hand at paint pouring.
First, Kyleigh selected a canvas from a table that had stacks of canvases ranging in price from $10 to $50.
Then she filled a cup with layers of acrylic paint that had been blended with a special pouring medium and silicone oil.
These additives are designed to reduce the paint’s viscosity and help create the round “cells” that pop up during pouring.
Next came the time to decide which technique to use.
“You can flip, pour, swipe —there is no right or wrong way to pour paint,” Pratt told her.
Kyleigh opted for the flip, wherein she placed the canvas on top of her cup, then flipped it over so the canvas was on the table and the cup was upside down.
The paint flowed out from under the rim of the cup, and Kyleigh began tilting her canvas to help the paint spread to each edge.
Beautiful swirls and ripples of color ebbed across the canvas in a riot of color, changing Kyleigh’s facial expression from one of intense concentration to one of proud delight.
Pratt then sets the paint with a propane torch, and asks that her guests come back in about a week to pick up their masterpieces.
By then the thick layer of paint will have dried and the canvas will be ready for display.
Painters can then choose to seal a painting with clear polyurethane at home.
Paint pouring isn’t the only thing guests can do at the Ethel Mae Studio.
Pratt said she plans to host workshops on vision board creation and intuitive painting, which has been likened to meditating with a brush in one’s hand.
For information on upcoming events, ideas for projects, and up-to-date pricing, visit the Ethel Mae Studio page on Facebook or contact Pratt at 410-829-2171. 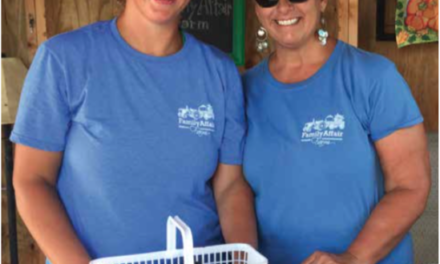 Doing his own zing