History of sleds and sleighs

There is a famous scene in the movie “”Citizen Kane,” in which the main character laments over innocence lost while thinking about his cheap antique sled from his youth, called “Rosebud.”
As the holiday season comes upon us, there are a lot of postcards, movies and iconic pictures of Santa in his sleigh, people cuddled up in an open sleigh being pulled by horses, sleds and snowfights with kids and more. What are the origins of sleds, sleighs and vehicles that move across icy tundra and snowy hills, and from are the origins of concept for such a vehicle?
The ancient Egyptians were some of the first people to have recorded using such a vehicle in history. 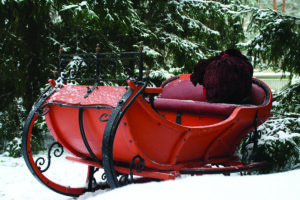 They used something called a “sledge,” which is also a general term for a sleigh, or transportation that slid, basically, instead of rolled, over the heavy sands of the desert, carrying heavy goods to build their grand monuments.
The Vikings also favored sleds and sledges, and many have been found in the excavation of their remains by archeologists. Sliding acorss terrain in cold-weather climates is advantageous because not only did it provide the ability to carry heavy goods and stockpiles for voyages, but it also afforded them to utilize pack dogs that could pull the sleighs, as well as reindeer.
In this area, reindeer were the beasts of budren, and as well, in Germany, where the origin and concept of Santa Claus was born.
When you see pictorial representations of Santa and his reindeer, the true origins come from sleighs being pulled by these beasts, due to their strong muscular configuration and strength.
The British, known to be world travelers, especially in the 19th century, utilized sled dogs and sledges, often times man-hauled as well over thick tundra. They also created expedition sledges that could go into open, unexplored areas such as the Arctic and Antarctica.
Building on the idea of ancient Egyptians and their slide techniques on tought terrain, long distance voyages in thick, cold snow had an answer with the long, sliding blades of the sledge or work sleighs.
Most people, especially this time of year, think about the iconic sleigh of Santa, or two people nestled under a blanket with a horse pulling them along a snowy country road, singing Christmas carols as they whip through the landscape.
This type of sleigh comes from the term “cutter,” and refers to an open horse-drawn, decorative sleigh that was developed for leisure and recreation in the United States in the early 1800s.
Nostalgia and historical reference has put this type of vehicle on postcards, holiday greetings, and a throw-back to different, more simple times of celebration of holiday matters, especially in rural areas.
A sled is depicted, as well, in old, iconic symbols of the holidays — a fresh, red-cheeked child getting a thrill as they race down a snowy hillside on their sled. This depiction refers to the recreational sled, a cheap, mass-produced sport vehicle with blades on the bottom of a wooden frame, designed with the same idea as the work sledge or passenger sleigh, but with the idea of carrying a person down a hill or slope for enjoyment or recreation.
You will see these for sale in antique stores today. Sometimes they are referred to as “Flyers.”
Sleds, sleighs and sledges all have the origins in a matter of solving a problem, which was moving goods, people or bodies along a slippery, snowy, often dangerous area of tundra or frozen ground.
As solutions in this area went hand-in-hand with innovation and industry, clever ways and means to move goods and get from point A to point B were introduced.
These vehicles not only produced the movement of items or people along a snowy route, but also engrained themselves in the iconic representation of the holidays, due to nostalgic memories of quaint countryside sleigh rides in the snow, or Santa on his magic sleigh.