Julia A. Purnell Museum can be a treat

(Editor’s note: DeeDee Wood is the owner of Black Cat Curiosities, an online antiques research and sales venue. This is first of a three-part “Eastern Shore Antiques Road Trip” series that will run through the November issue.) 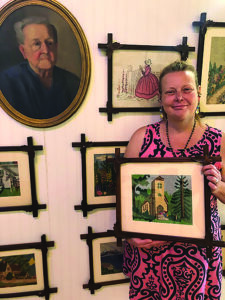 When you walk into the Julia A. Purnell Museum in Snow Hill, Md, you are instantly transported back into time.
Sandra Hudson, weekend docent, greets you with a big smile.
There are kiosks and professional museum displays depicting not only the needle art of Ms. Purnell, but also a rich historical collection of more than 10,000 items donated to the museum, (which was a historic church in the town,) from a collection of an avid antique collector, William Purnell, Julia’s son.
The Executive Director of the organization, Dr. Cynthia Byrd, took me on a tour of the museum, told me tales and history of Snow Hill, and described the Purnells and their passion for needle art and antiques.
“William Purnell was very proud of his mother’s needle art. He made all of the frames himself,” Byrd said, while displaying a rather large, impressive collection of his donations.
“Julia Purnell was born in Snow Hill in 1843, and lived to be 100 years old,” Dr. Byrd explained. “She married William H. Purnell, a storekeeper, in 1869 and had two sons. She created a variety of needle art throughout her life, including embroidery, cross stitch and more.”
Julia was a prolific artist.
As she grew older, she not only had experience with publishing patterns and instructional materials, but also created a wide variety of needle art, including churches, gardens and scenes of homes in Snow Hill.
“Her work is special,” the executive director said, showing off a favorite crewel wool embroidery, a scene of a house with lovely flowers in a garden. “Her work was entered into shows by her and her son William, and she won a variety of prizes and accolades for her work.”
A pamphlet in the museum states that Purnell won awards at the New York and Philadelphia Hobby Shows and a Grand Prize at the Wicomico Farm and Home Show.
In 1941, Julia A. Purnell was inducted into the National Hobby Hall of Fame.
In 1957, William Purnell’s collection, which included donated items from townspeople in Snow Hill over a period of years, was gifted to the museum, to the Town of Snow Hill.
William Purnell was an avid collector, and with his generous donation, over 10,000 objects found a new home for display.
The donation made this museum not only a showcase for the life’s work of the needle art of Julia A. Purnell, but it also became an important representation of the memories and objects of importance for the entire town.
It was housed in the former St. Agnes Catholic Church, an impressive building built in 1891, and still resides in this building of former worship today.
There is a “general store,” which shows yesteryear’s medicine bottles, cans, sundries and more, a Victorian era collection with all types of examples of the era, toys, old machines, bicycles, and a special exhibit, The People of the Pocomoke, which educates visitors of the Native American culture of the region.
Dr. Byrd states that she worked with local tribal authorities and nations to accurately depict the artifacts and their history in this display.
One particular exhibit depicts the Outten Theatre, which burned down long ago, but was once located in downtown Snow Hill on Washington Street.
The museum showcases the original projector of the theatre, a 1935 massive machine that showcases a theatrical display.
The museum also educates visitors on the African American experience in the town and surrounding areas before emancipation, a children’s display of unusual toys, an impressive Civil War display, complete with weapons, uniforms and other objects in a case, and a top tier of large antiques that ring the museum’s upper floor vaulted ceiling of the old church.
Antique lovers will be thrilled to view the massive collection.
It is organized in such a way that you feel as if you have stepped back in time into a historic Snow Hill, viewing Victorian life, old beach life antiques, a giant penny farthing bicycle, toys that were once cherished by Snow Hill’s children, furniture, kitchen instruments and so much more.
To list all of the artifacts, objects, antiques and collections would be impossible, but it is possible to view them, as they are highly organized and displayed in a professional, interesting manner.
It could take up to three hours, Byrd proudly states, “to take in all of the information and artifacts.”
The Julia A. Purnell Museum is located at 208 West Market St. in Snow Hill Md., and offers reasonable membership rates, private tours upon request, educational programs for youth, a December open house, a gift shop, an annual FiberFest and so much more.
They can be contacted at 410-632-0515 and are open Tuesday-Saturday 10 a.m. to 4 p.m., and Sunday from 1-4 p.m.
For inquiries into more specific information, contact Dr. Cynthia Byrd, Executive Director, or visit the museum’s social media pages or www.purnellmuseum.org.