The lore behind alluring lamb’s ears 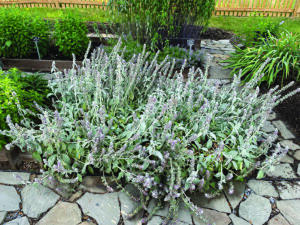 Many easy growing perennials provide pleasing eye and aroma appeal.
But Lamb’s Ears, or Stachys byzantine, offer an irresistibly velvet-like touch, with a touch of history.
The silky soft grey/green leaves literally bring an invitingly pleasing touch to children’s and sensory gardens in particular.
Among its other gardener-friendly qualities is the fact that habitual garden intruders, notably deer and rabbits, aren’t fans of the plant’s taste or mouth feel.
And both anecdotal evidence and botanical studies confirm that in contrast to their soft touch, they’re regarded as exceptionally hardy.
Their appearance may be warm and fuzzy, but they’re able to handily withstand drought plus dry, rocky and shallow soil, black walnut toxins, and air pollution, according to the Mt. Vernon Estate website.
Lamb’s Ears’ uniquely textured leaves likely repel most insects, noted Dodge County Wis., Master Gardener Carol Shirk.
The non-native’s sun loving ground cover’s origins have been traced to Central Turkey, Iran, and the Caucasus egion between the Black Sea and the Caspian Sea.
Technically classified as invasive, they’ve sometimes been characterized as weeds due to their ease of proliferation when unchecked.
However, their shallow roots allow for easy removal should they prove to be too aggressive, problematic mostly only under ideal growing conditions, Shirk added.
Credited with offering pleasing border backdrops highlighting more colorful florals, the plant does contain short lived blooms of its own, similar to Hostas and other more foliage focal varieties.
However, deadheading is recommended for optimal plant growth and to prevent natural seed proliferation, Shirk suggested.
Richard Hawke, Plant Evaluation Manager at the Chicago Botanical Garden, did a detailed comparative evaluation of different Lamb’s Ears varieties and cultivars rating color, flower length, bloom period, foliage color, plus plant height and width, along with an overall rating.
Calling them “stalwart perennials”, Hawke especially commended essentially nonflowering cultivars Big Ears and Silver Carpet for low maintenance.
Referring to Big Ears as a “shy flowerer,” he described its foliage texture and muted coloring as “the perfect foil for other perennials–it looks good with both hot and cool-colored flowers.”
Like other immigrants, Lamb’s Ears have nevertheless significantly contributed to our national story. John Bartram included them for sale in his catalog from 1771 to 1809, according to Mt. Vernon Estate records.
During the Civil War, the plant provided essential service as a vital “nature’s bandage,” noted Greg Susla, who has overseen its cultivation at the Pry House Medical Garden at the Antietam Battlefield in Frederick, Md.
The highly absorbent, astringent, and even antibacterial characteristics provided by the plants were crucial for supplying readily available bandages which absorbed and contained blood from the war-wounded soldiers needing immediate treatment.
Susla, a former critical care pharmacist with the National Institues of Health, began volunteering with the National Museum of Civil War Medicine of Frederick in 2011.
Learning that the Museum’s Antietam Battlefield facility, the Pry House Field Hospital Museum, had a medicinal garden, Susla was intrigued, reminded of a medical garden at the University of Connecticut, where he earned his pharmaceutical degree during the 1970s.
The Pry House served as headquarters to General George McClelland and pioneering Dr. Jonathan Letterman, who revolutionized medical treatment for troops. Following the 1862 battle, wounded soldiers were treated in the Pry House barn which had been transformed into a field hospital, one of his innovations. Notable high ranking patients receiving care included General Joseph Hooker, and General Israel Richardson, visited by President Abraham Lincoln.
Learning that a graduate student was restoring the garden he eagerly volunteered to help. But once the grad student departed the project was abandoned for several years.
In 2016, Susla and wife Lisa Romano became involved in restoring it once more, clearing the weeds and extensively researching medicinal plants which might have been grown in the Mid-Atlantic, but especially during that era. Since that time, Susla has been the Certified Master Gardener responsible for all garden-related activities of the medicinal garden.
After intensive weeding and raised bed construction, the planting began and continued in several stages, with additional varieties added.
Amidst the weeds in the neglected beds, Susla discovered surviving specimens of Lambs Ears planted back in 2011, which he ultimately transplanted onto the freshly built plots.
Today, there’s a thriving 4 by 6 inch expanse of Lamb’s Ears growing strong, surviving seasons and weather systems, and several years of benign neglect during the garden’s dormant period.
The Suslas then replanted some of the Lamb’s Ears again, into their home garden, where they’re also doing nicely.
Noting the plants’ successful growth, he addressed the issue of aggressiveness, saying that in his experience, the Lambs’ Ears expansion was slow and steady enough over several years to readily be held in check if needed.
A potential Achilles’ heel of the otherwise sturdy Lamb’s Ear is its susceptibility to rot when faced with high humidity, definitely a factor in the often muggy Eastern Shore.
Starting with well-drained soil and avoiding overhead watering as much as possible are two strategies Shirk said.

A melting pot of culture, activity