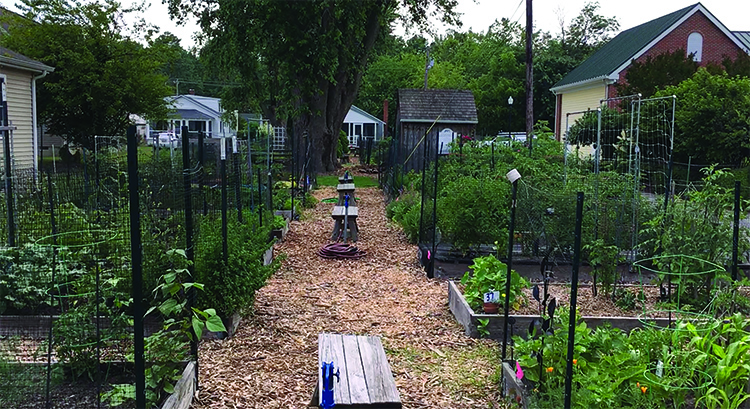 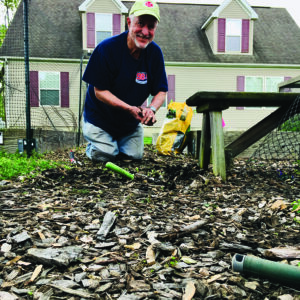 This year, the St. Michaels Community Garden celebrates its 10th year of providing community members with space to grow vegetables, herbs, flowers and fruits for personal consumption or for donation, as chosen by the gardeners themselves.
The garden community shares responsibility for maintaining paths, communal spaces, and equipment, while individual members are responsible for planting, harvesting and upkeep of their raised beds.
Water, hoses, and some gardening tools are provided, and some funds are available to help with the purchase of seeds or garden equipment for those who need support to do so.
Benefits of a community garden are widely touted in helping both those that use the space directly and the surrounding community.
According to Soil Science Society of America, neighborhoods with successful gardens: Combat food insecurity, both in quantity and quality; build on the resources of cities, towns, and counties to deal with problems; fight climate change by reducing the distance food travels, and minimize the carbon footprint of food; boost the local economy; improve community health through better nutrition and increased physical activity and create social capital.
The St. Michaels Community Garden, located between Fremont and Conner Streets, began in 2012 on land leased through the Town of St. Michaels and with support of an Eagle Scout project.
“We had an awful lot of community support,” recalled Elizabeth Beggins, who was part of the initial planning committee and now serves on the Garden Advisory Committee.
She added the initial plan was the Eagle Scout would build half the garden boxes and the balance would be built over the next few years, but a local Rotary Club stepped up and built them in the first year.
The garden includes 40, 4-foot by 14-foot beds rented on a yearly basis on a first-come, first-served basis.
This year, five beds were reserved for new gardeners with a limit of one bed per participant.
Interest from gardeners has ebbed and flowed over the years, Beggins said, but when it came time to plant, all the beds were assigned and used.
Support for the project and what it stands for has been the reason it’s lasted a decade and is poised to continue for years to come.
“It’s totally the community,” Beggins said. “It’s people all over the Bay Hundred area who come together.
“You still have the community aspect of something that benefits more than just you.”
It started with people such as Laurie Pratt, Mala Burt and Val Kenn Gray who helped get the project off the ground and managed year to year.
Beggins also mentioned Emmanuel Johnson, the former pastor at Union United Methodist Church, who was a vocal advocate for the project and hosted a Souper Supper for Seeds community event.
“They were all key volunteers back when things got going,”Beggins said.
Now — with a relatively-new Garden Advisory Committee of Jack Austin, David Lloyd, Janet Macdonald, Susan Wiest and Beggins — the volunteer group is looking forward to building more energy in the community, coming out of years of pandemic-related restrictions and precautions.
They’ve instituted maintenance days at the garden where participants work together to keep up the areas around the raised beds. Along with keeping things neat, the days also bring together gardeners who might not cross paths otherwise.
The project is also scheduled to hold a kickoff event at the garden on May 15 from 3-5 p.m. for participants and supporters of the community garden.
“It’s just a chance for people to come together outside, meet one another and have some light refreshment,” Beggins said.
This year, Beggins said there was even a waiting list to start the season, but that was eventually whittled down as some people’s circumstances changed, causing them to give up their spot.
Beggins said the garden brings together a wide range of garden expertise into one place.
There are experienced growers next to people who have never had a garden before.
“And we all kind of end up in the same place, which is, ‘Hey, look, I did that!’” she said.
The St. Michaels Community Center serves as fiscal agent for the community garden, with the $5 per year, per-bed rental fee and other donations helping to maintain the property year-round.