Trees that sound off with distinctive barks 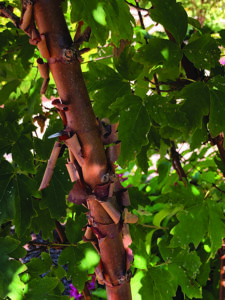 October is a great month for planting trees that have a robust root system.
The weather has cool temperatures with some rain making it a wonderful month for newly planted tree roots to get established into their new soil home.
Choosing a tree should not be a spur of the moment idea, some thought should be given to how tall and wide the tree will eventually get because it is not a good idea to plant large trees too close to homes and other buildings or too close to power lines.
Trees that lose their leaves in the fall are deciduous trees, and are perfect for planting on the southwest side of a home to help shade and cool the home during the heat of summer.
Because they lose their leaves in the fall, they can let winter sunlight in to help warm the home during the coldest time of the year. A single story home can have a shade tree that gets 30 feet tall while a two story home needs a tree that can grow 50 feet tall.
Some trees are chosen for the size and shape of the tree itself while others are chosen for the size and shape of the leaves or the fall color.
Other trees can be considered for their interesting bark that looks good in the summer and is outstanding during the winter months.
The Paperbark Maple, Acer griseum, can grow 20-30 feet tall and wide, making it more an ornamental tree with upright growth and an oval to rounded crown.
The tri-foliate leaves are dark bluish green on top and pale green on the underside, but it is the dark cinnamon exfoliating bark that captures the attention during the winter months when the foliage has fallen.
The rich dark bark curls at the edges catching the light and creating soft shadows on the trunk and branches of the tree.
There are two nice cultivars, “Cinnamon Flake,” which has finer shredding of the bark and Gingerbread that has thinner shredding of the bark.
The Paperbark Maple loves to grow in full sun and moist but well drained soils.
They can thrive in the heat of the Eastern Shore summers and in the fall the leaves turn a bright orange red that glows in the landscape. Another tree with beautiful exfoliating bark is our native River Birch, Betula nigra, which loves to live in a full sun to partial shade but needs moist to wet soils to thrive.
The River Birch can grow 40 to 60 feet tall with an oval crown and leaves with medium green color on the top and a soft white-green on the underside of the leaves.
It can grow as a single trunk or grouped with three trunks. The thin papery bark can be gray-brown, salmon-brown, cinnamon-brown or a reddish brown which curls at edges to expose a lighter under bark color.
Two cultivars to consider are “Cinnamon Bark,” which has very light under bark color and City Slicker, which has darker green leaves, dark cinnamon-brown bark with white under bark color.
City Slicker also has better resistance to the Bronze Birch Borer.
The River Birch leaves turn soft yellow in the autumn, then fall to reveal the lovely bark.
Crape Myrtle, Lagerstroemia indica “Natchez” can grow 25-30 feet tall with a rounded crown, small oval dark green leaves and beautiful clusters of curling white crape paper like flowers.
It also has a soft tan bark that exfoliates to reveal a pale red under bark.
Unlike the Paperbark Maple and the River Birch, the Crape Myrtle’s bark curls off in large sections, leaving a small pile of long thin curls at the base of the trees. “Natchez” thrives in both the heat and the high humidity of the Shore and shows good resistance to Powdery Mildew which can plague the older cultivars.
The plants grow with two to three strong trunks and a rounded crown.
They like to grow in sandy or clay soils with moist but well drained soils, and once established are very drought tolerant.
“Natchez” flowers three times during the summer with the bright white shining against the dark green leaves.
In the fall the leaves turn a soft orange red color then leave the tree to show off the lovely red and tan bark.
(Editor’s Note: Ginny Rosenkranz is a commercial horticulture specialist with the University of Maryland Extension.)

April is when tulips bloom 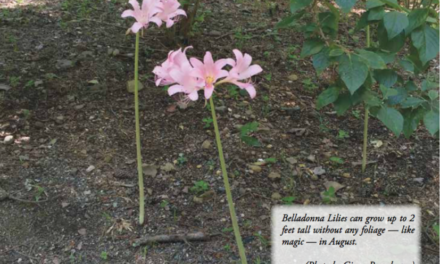 Consider the magic of Belladonna lilies